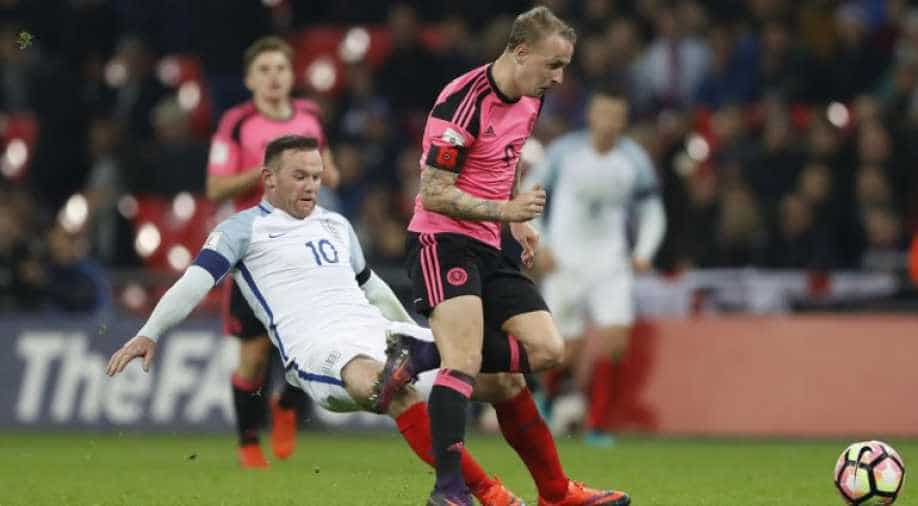 While it was not the one-sided romp the scoreline suggests and England only pulled clear in the second half having survived some nervy moments, the result will have strengthened Gareth Southgate's chances of claiming the role on a permanent basis. Photograph:( Reuters )

A trio of thundering headers gave England a thumping victory over their oldest foes as Scotland put up a fight before being swept aside 3-0 in Friday's World Cup qualifier at Wembley.

Daniel Sturridge's bullet header in the first half and equally impressive efforts after the break from Adam Lallana and Gary Cahill ensured England emerged from international football's oldest fixture having consolidated their lead at the top of Group F.

While it was not the one-sided romp the scoreline suggests and England only pulled clear in the second half having survived some nervy moments, the result will have strengthened interim boss Gareth Southgate's chances of claiming the role on a permanent basis.

With his side having moved onto 10 points from four matches, two clear of nearest rivals Slovenia, Southgate now looks almost certain to be appointed the permanent replacement to Sam Allardyce.

"Tonight is down to the players they have shown what they are capable of," he told reporters -- although he was equally keen to stress his side had almost been the architects of their own downfall when Scotland put them under pressure in the second half.

For his counterpart Gordon Strachan, though, the future looks increasingly bleak, his side sitting second bottom in the standings with four points.

However, he was adamant, that he would not be rushed into decisions about his role.

Strachan had made sweeping changes to the side that lost to Slovakia in their previous qualifier and had clearly set his team up to make England uncomfortable and it was a game plan that worked to perfection until 24th minute.

A sprawling Scottish defender blocked Raheem Sterling's shot, but the ball fell kindly for Kyle Walker whose driven cross was angled superbly into the net by a stooping Sturridge.

Having broken the visitors' resistance, England conspired to hand them a route back into the match two minutes later and would have been pegged back had Scotland defender Grant Hanley not headed hopelessly over the bar when completely unmarked.

That was the first of a series of let-offs for England, who survived two heart-in-mouth moments at the start of the second half when James Forrest pulled a shot hideously wide from 10 metres and Robert Snodgrass had one blocked from a similar range.

Within moments, however, England put the encounter to bed showing the sort of quality in front of goal Scotland had lacked, as Danny Rose's cross from the left found Lallana on the penalty spot to head powerfully past Craig Gordon.

England's third arrived on 60 minutes as Wayne Rooney's corner found Cahill, who flashed his near-post header past Gordon and into the far corner.

The defeat was already ensured, but England should have rubbed further salt into Scotland's wounds but Sterling somehow scooped his finish over from almost under the cross bar.