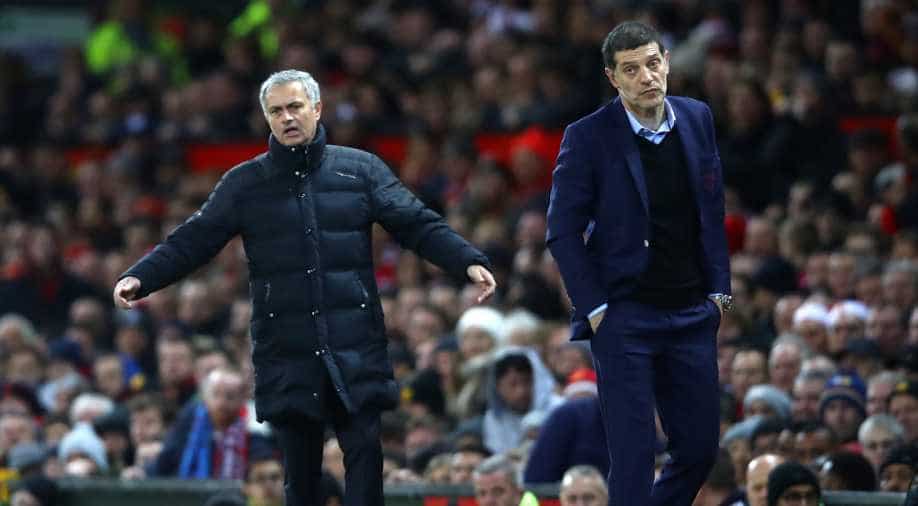 It was United's fourth successive home draw in the league, a first since 1980, and left them 11 points below leaders Chelsea in sixth place. Photograph:( Getty )

Manchester United manager Jose Mourinho was sent off as his side lost more ground in the Premier League title race by drawing 1-1 with West Ham United on Sunday.

After Diafra Sakho's second-minute opener was cancelled out by Zlatan Ibrahimovic, Mourinho was sent to the stands for kicking a water bottle in protest at Paul Pogba's booking for diving.

It was United's fourth successive home draw in the league -- a first since 1980 -- and left them 11 points below leaders Chelsea in sixth place.

United assistant manager Rui Faria, filling in for Mourinho, told BBC Sport: "We all believe the results will appear.

"The referee explained it to Jose and there is nothing more to say. I think it was frustration from Jose after the yellow card for Pogba.

"It should be a foul for us, but the referee understood it in another way."

Elsewhere, Alexis Sanchez scored twice as Arsenal kept pace within the leading pack by winning 3-1 at home to Bournemouth.

Mourinho made six changes to his starting XI at Old Trafford, but his bench created the biggest stir as formerly exiled midfielder Bastian Schweinsteiger made an unexpected return to the match-day squad.

West Ham needed just 90 seconds to go ahead as Dimitri Payet's free-kick from the right was headed in by Sakho.

In the 21st minute, Pogba's deep cross was nodded in by Ibrahimovic, who has now scored seven league goals this season.

Mourinho reacted by furiously kicking a plastic bottle and was duly sent to the stands for the second time this season.

Wayne Rooney, whose next goal will equal Bobby Charlton's 249-goal club scoring record, and Henrikh Mkhitaryan came on for United in the second half.

Jesse Lingard saw a goal chalked off for offside after Mkhitaryan had hit the post, while United were indebted to goalkeeper David de Gea for a crucial late save to deny Ashley Fletcher.

United will hope their luck changes when West Ham return to Old Trafford in the League Cup quarter-finals on Wednesday.

Arsenal ended a run of three straight draws in all competitions with victory over Bournemouth at the Emirates Stadium.

With England midfielder Jack Wilshere watching from the stands due to the terms of his loan from Arsenal to Bournemouth, the home side took a 12th-minute lead courtesy of a horror moment from Simon Cook.

In seeking to play the ball back to goalkeeper Adam Federici from the right, he undercooked his pass horribly, giving Sanchez the time to pick his spot and put Arsenal ahead.

Bournemouth equalised in the 23rd minute when Callum Wilson netted from the penalty spot after Nacho Monreal was harshly adjudged to have fouled him.

But Arsenal equalised in the 53rd minute when Theo Walcott headed in Monreal's masterful cross and Sanchez made the game safe in stoppage time by tapping in substitute Olivier Giroud's cross.

"I felt we started well, but when they equalised we were nervous and that's where having three consecutive draws played a little bit on our minds," said Arsenal manager Arsene Wenger, whose team trail Chelsea by three points.

Right-back Mathieu Debuchy, making his first Arsenal start for 370 days, was forced off by a hamstring injury in the first half and Wenger expressed fear the problem was "severe".

Everton manager Ronald Koeman made an unhappy return to former club Southampton as his current side fell 1-0 to his previous employers.

Stoke City climbed to 11th in the table with a 1-0 win at Watford.

A 29th-minute own goal from Watford goalkeeper Heurelho Gomes settled the game, with Charlie Adam's header hitting the post and bouncing into the net off the unfortunate Brazilian.