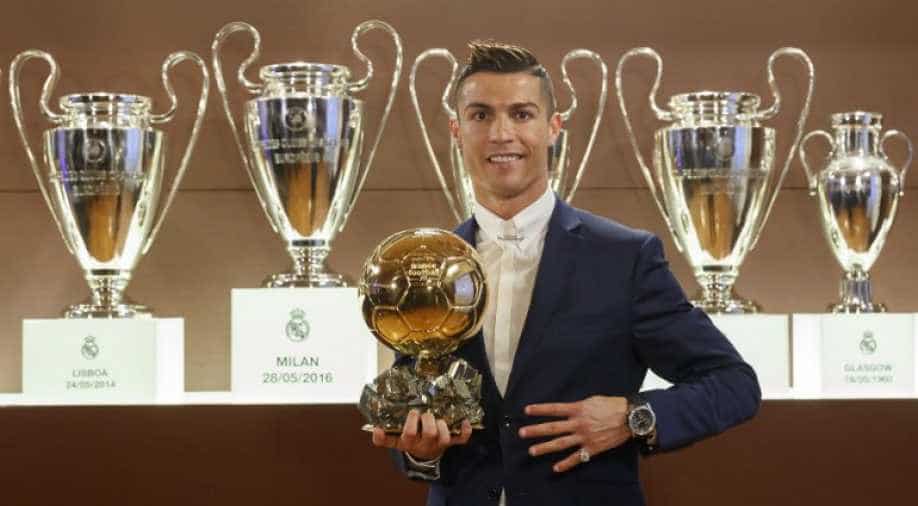 Ronaldo is now one Ballon d'Or behind Messi, who was second this time with French striker Antoine Griezmann third. Photograph:( AFP )

Cristiano Ronaldo called it "a dream come true again" as he won his fourth Ballon d'Or on Monday to get one over his nemesis Lionel Messi for the title of best player in the world.

It was the perfect ending to another fantastic year for the Real Madrid star, who won the Champions League for the second time in three seasons and then led Portugal to their first major title at Euro 2016 -- albeit he went off early injured and in tears in the surprise victory over France.

As has been the case for almost a decade now, the 31-year-old's main rival was Messi -- but the Barcelona and Argentine maestro had to relinquish the crown after a less-than-stellar year for club and country by his lofty standards.

Ronaldo is now one Ballon d'Or behind Messi, who was second this time with French striker Antoine Griezmann third.

Never one to play down his achievements, Ronaldo was spotted midweek in training having dyed his hair gold in anticipation and several media outlets published a photo earlier on Monday appearing to confirm he was the winner, before organisers France Football magazine made the official announcement.

"For me, it's a great honour to receive my fourth Ballon d'Or. The emotion is like the first one -- it's a dream come true again," Ronaldo, who is at the Club World Cup in Japan, told L'Equipe TV.

"I never thought in my mind to win four times the Ballon d'Or, I'm so pleased and so happy.

"I have to thank all my team-mates, the national team, Real Madrid, all the people, the players who helped me to win this individual trophy.

"I want to enjoy this moment because it's not easy to win this."

Ronaldo was the firm favourite to win, but the prestigious prize comes at a time when the prolific forward has generated negative headlines in the past week over accusations of tax evasion.

"You believe I am worried? He who owes nothing fears nothing," Ronaldo told broadcaster RTP at the time.

Ronaldo, the highest-paid sportsman in the world, first won the Ballon d'Or in 2008 after Premier League and Champions League triumphs with Manchester United.

But it was only in 2013 that he added his second -- Messi had hogged it before then -- and Ronaldo made it a hat-trick the following year.

United were quick to offer their congratulations on Twitter, calling a fourth Ballon d'Or "incredible".

The first Ballon d'Or was won by Stanley Matthews, at the time with Blackpool, who beat Alfredo Di Stefano for the inaugural title in 1956.

The Ballon d'Or is decided by a vote of 173 journalists.