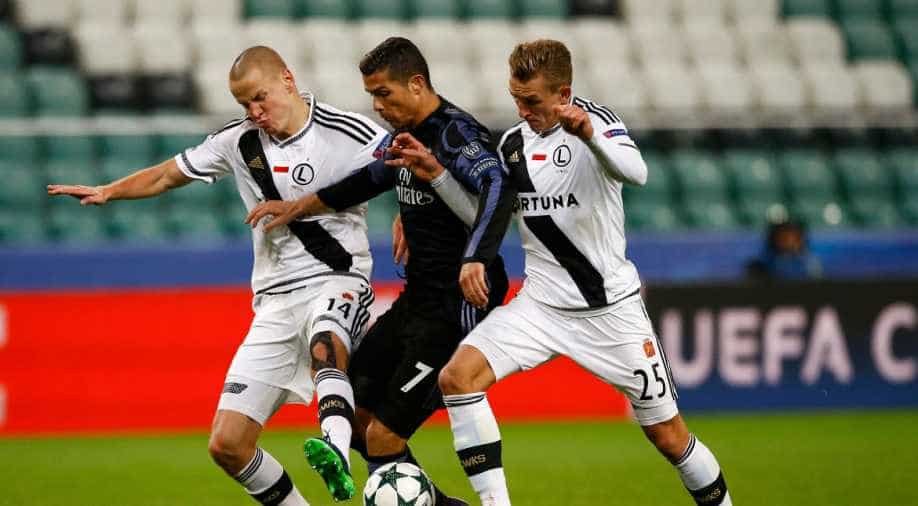 UEFA had ordered the game to be played behind closed doors after crowd trouble overshadowed Legia's opener against Dortmund. In photo: Madrid's Cristiano Ronaldo and Warsaw's Michal Kopczynski and Adam Hlousek in action. Photograph:( Reuters )

Mateo Kovacic's late strike avoided embarrassment for Real Madrid as the European champions surrendered a two-goal lead before drawing 3-3 with Legia Warsaw in an enthralling Champions League game played amid an empty stadium on Wednesday.

Croatia midfielder Kovacic capped a fine individual display by rifling in the equaliser in the 85th minute after Legia had come from behind in the Group F encounter to take the lead in the 83rd through Thibault Moulin's powerful finish.

UEFA had ordered the game to be played behind closed doors after crowd trouble overshadowed Legia's opener against Dortmund, meaning only several hundred visiting Real supporters witnessed the thriller that featured a historic start.

Gareth Bale gave Real the lead in the Polish Army Stadium in just 57 seconds with a thunderous strike from outside the area to record the fastest-ever goal scored by Real in a Champions League match.

Karim Benzema doubled their advantage in the 35th, taking advantage of a Bale cutback to sidefoot home.

Yet Legia hit back with a brilliant piece of skill and finish from Vadis Odjidja five minutes before halftime, while Miroslav Radovic completed a shock comeback by the hosts with an arrowed toe poke into the bottom corner in the 58th.

Real are second in Group F on eight points, two behind leaders Borussia Dortmund, who qualified by beating Sporting Lisbon 1-0 on Wednesday.

Real travel to Sporting on Nov. 22, where a point will also see them through. Legia are out but can still challenge Sporting for third place to reach the Europa League last 32 after taking their first point in the competition for 21 years.

Bale, who signed a new five-year contract with the European champions in midweek, got the game off to a flying start by swivelling to hook the ball into the top corner.

The Wales international teed up Benzema later in the half with the help of Kovacic and Real looked set to cruise towards a victory that would have qualified them for the last 16, but Legia hit back before the break with Odjidja's wonderful goal.

Radovic then took advantage of slack Real defending to drive at the defence and let fly from the edge of the box, sending the ball under Keylor Navas.

Aleksandar Prijovic hit straight at Navas but barely a minute later made amends by laying the ball off to Moulin to crash the ball in off the post.

Real's blushes were saved barely two minutes later though by Kovacic, who has taken on new importance in the absence of compatriot Luka Modric.

Real Madrid to go all out for win at Atalanta despite injuries, says Zidane