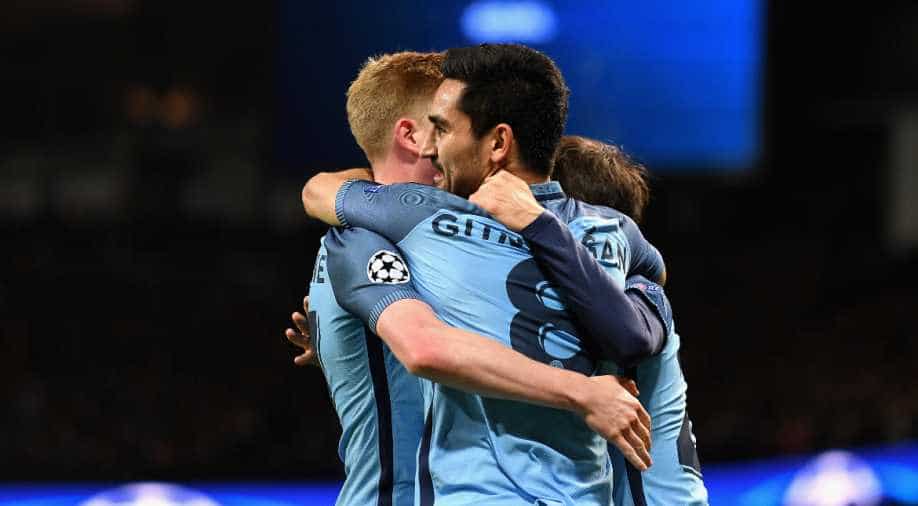 Ilkay Guendogan scored twice and Kevin De Bruyne netted a superb free kick in a magnificent display from the home side that ended Barcelona's 100 per cent record. Photograph:( Getty )

Coach Pep Guardiola was left thrilled after Manchester City revived their Champions League bid by beating his old club Barcelona 3-1 in a gloriously open Group C encounter at the Etihad Stadium on Tuesday.

Ilkay Guendogan scored twice and Kevin De Bruyne netted a superb free kick in a magnificent display from the home side that ended Barcelona's 100 per cent record and made handsome amends for City's 4-0 drubbing at the Nou Camp two weeks ago.

City's victory looked unlikely when Lionel Messi followed up his hat-trick in the game at the Nou Camp with a dazzling opener on the counter-attack in the 21st minute and Barca were in control before Guendogan cashed in on a Sergi Roberto mistake.

In a game peppered with fine attacking and dubious defending, City then ran Barca ragged as the exceptional De Bruyne netted in the 51st minute before helping set up Guendogan's second after 74.

City's best Champions League night left Barca frustrated as they failed to gain the win that would have sealed their place in the knockout stages for a 13th successive season.

The home side's big night started brightly as Raheem Sterling appeared to be brought down in the box by Samuel Umtiti only to be booked, harshly perhaps, for diving.

Then, in a devastating counter-attack initiated by Javier Mascherano when he broke up a City thrust in his own box, Messi found Neymar on the left before marauding down the field to latch on to the Brazilian's pass and claim his 90th Champions League goal.

Barca looked poised to take over, threatening a second goal until Sergi Roberto stroked a pass carelessly across his own defensive line, allowing Sergio Aguero to intercept and feed Sterling who crossed for Guendogan to tap the ball in.

A poor touch from Sterling stopped him putting City ahead at the start of the second half but they did not have to wait long to go ahead as De Bruyne's free-kick dipped over the wall and beat the despairing dive of Marc-Andre ter Stegen.

De Bruyne came close to adding to the lead as the hosts flooded forward.

Barca should have equalised when a stray back pass from John Stones led to Andre Gomes hitting the bar when it seemed easier to score.

City, though, earned reward for their domination and some wayward defending by the visitors when De Bruyne's pass cut them apart and set up Jesus Navas to whip in the cross that eventually fell to Germany midfielder Guendogan who hammered his fourth goal in two games.