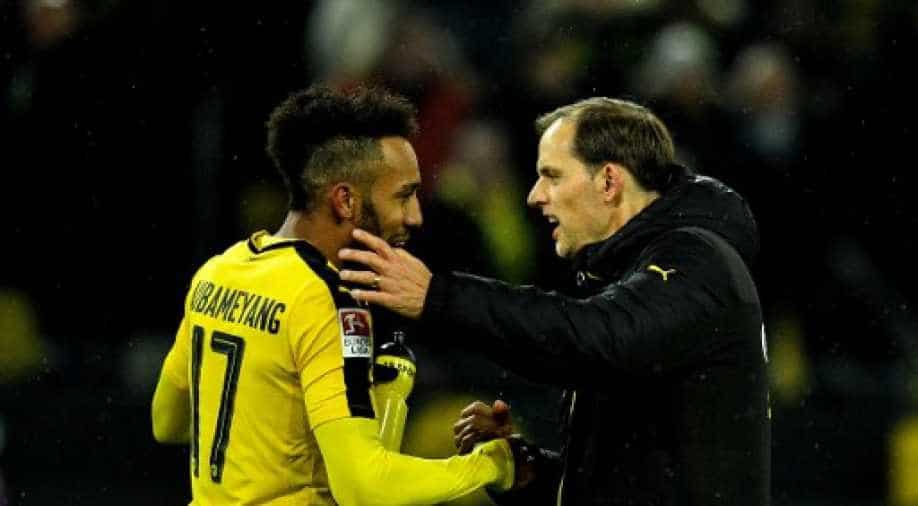 Dortmund's head coach Thomas Tuchel celebrates with his Gabonese forward Pierre-Emerick Aubameyang, who scored his 17th league goal of the season, the highest tally so far this year. Photograph:( AFP )

Flu-hit RB Leipzig failed to capitalise on Bayern Munich's draw against Schalke as they lost to Borussia Dortmund 1-0 on Saturday.

Pierre-Emerick Aubameyang's 17th goal of the season -- two more than Bayern's Lewandowski in the top goal-scorer chart in the Bundesliga -- meant Dortmund shot four places to go third in the Bundesliga standings.

Leipzig's loss mean at Dortmund that Bayern have now stretched their lead to four points, despite the sluggish performance they put on against Schalke.

Bayern started the match brightly, with their captain Philipp Lahm making his 500th appearance for the club. Bayern took the lead in the ninth minute, thanks to Lewandowski, but were then made to work hard to retain their lead.

But Schalke kept their composure and equalised four minutes later when Naldo hammered a free-kick past Bayern goalkeeper Manuel Neuer.

It completed the scoring, but both sides squandered clear first-half chances as Schalke striker Guido Burgstaller hit the crossbar, just like Lewandowski did at the other end.

Over in the Leipzig-Dortmund match, there was drama in added time as Leipzig sub Federico Palacios Martinez, making his Bundesliga debut, put the ball in Dortmund's net, but was flagged for a marginal offside.

Leipzig struggled without top-scorer Timo Werner, midfielder Diego Demme and striker Marcel Sabitzer, who all have flu, while playmaker Emil Forsberg was suspended.

"We won the game, that's what counts," a relieved Reus told Sky.

"We put up a good fight, it was a very aggressive game and the win is okay."

Hertha moved up to fifth with a 1-0 win at home to strugglers Ingolstadt as Japan midfielder Genki Haraguchi scored the winner after just a minute at Berlin's Olympic Stadium.

Cologne are sixth following their 1-0 win at Wolfsburg thanks to Anthony Modeste's second-half penalty, having been fouled by Wolves goalkeeper Diego Benaglio in the area.

Borussia Moenchengladbach picked up their second straight win with a 3-0 victory at home to Freiburg courtesy of goals from captain Lars Stindl, striker Raffael and winger Patrick Herrmann to go tenth.