Allardyce makes instant impact as Everton rise into top half 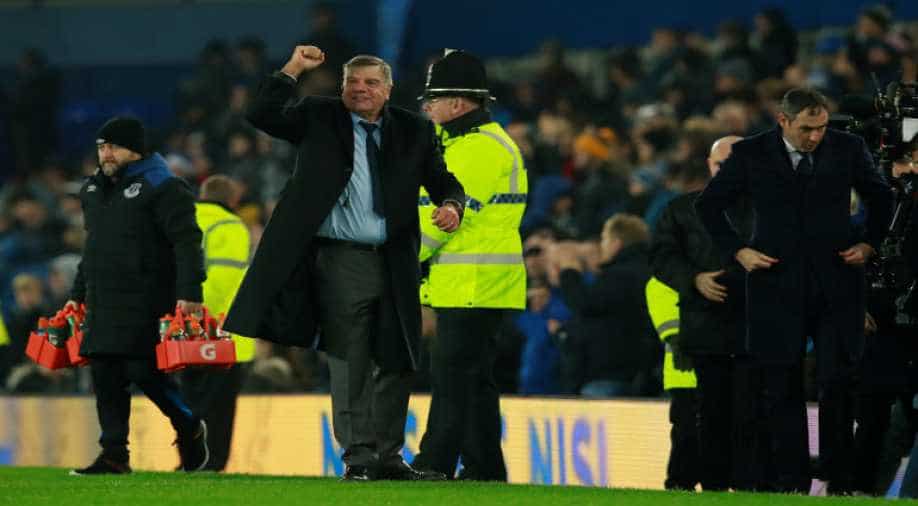 Everton manager Sam Allardyce’s ability to quickly get teams out of relegation trouble is the defining characteristic of his management career but his impact at Goodison Park has been so swift he is already looking at a top-half finish.

Everton's 3-1 win over Swansea City on Monday pushed the Merseysiders up to ninth in the Premier League and the worries of a long scrap against the drop already seem a distant memory.

"The target now? Top half but let’s not get carried away," said former England manager Allardyce after second-half goals from Gylfi Sigurdsson and Wayne Rooney, with a penalty, had secured a comeback victory over the bottom-placed Welsh club.

Everton were in the relegation zone when they sacked Dutchman Ronald Koeman on Oct. 23 following a humiliating 5-2 loss at home to Arsenal.

The club’s Under-23 coach David Unsworth then had an extended spell as caretaker manager during which he managed just two wins in eight games.

Unsworth's second and final win, a 4-0 success against West Ham United, came with Allardyce already watching from the stands and, while he was not on the bench for that game, he is making sure that victory counts on his record.

Since formally taking the role, Everton have beaten Huddersfield Town and Newcastle United and drawn at local rivals Liverpool before Monday's win.

“To collect 13 out of 15 points is outstanding considering the position where we have come from,” said Allardyce.

"We have scored 11 goals in five games and kept clean sheets. We are a team that comes back from 1-0 down to win and that shows the character."

Allardyce, 63, has never had a team of his relegated from the Premier League, despite working with clubs such as Sunderland and Crystal Palace who were in deep trouble when he took over.

He managed to maintain top flight football for clubs such as Bolton Wanderers and Blackburn Rovers and took West Ham back into the Premier League – and kept them there - after their relegation.

Focusing on solid defending and good organisation has again brought results for the man dubbed ‘Fireman Sam’ but he said his assistants, such as former Leicester City boss Craig Shakespeare and veteran coach Sammy Lee, deserved their share of the credit.

“From a tactical point of view, I’ve simplified the game and I’m man-managing the players. I brought some experienced and talented staff with me, along with the rest of the staff – I want everyone to get better. To turn around so quickly is great credit to everyone. Not just me,” he said.

"What looked like a desperate situation is becoming a comfortable one. And now people are looking up the table rather than down. The last clubs I took over were tougher to turn around initially," he said.

The next test for Everton comes against third-placed champions Chelsea at Goodison on Saturday.

"We’ve got to try and get a result against Chelsea and then we’ll really know what we’re made of," added Allardyce.

"With this confidence, if we can get a result we’re on the right track for finishing as high as we can. Let’s see if the lads can pull one out of the bag."