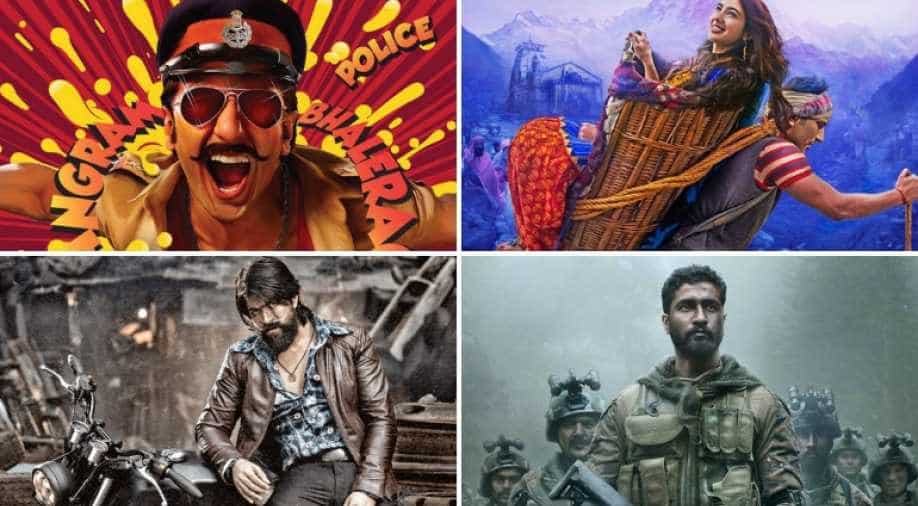 'Simmba', 'Kedarnath', 'KGF' and 'Uri: TheSurgical Strikes', did excellent roles and have been the talk of Bollywood within a month.

The year 2018 saw a massive change in Bollywood where films by the three Khans bombed at the box office. It is just the beginning of 2019 and the year has already seen a big hit in Vicky Kaushal starrer 'Uri: The Surgical Strike'

Bollywood has had a good month till now, as the last four releases- 'Simmba', 'Kedarnath', 'KGF' and 'Uri: The Surgical Strikes' - have done good business at the box office.

The young upcoming actors are doing some tremendous work in films which have great content. It started with 'Kedarnath' which released on 7th December 2018, then 'KGF' on 21st Decmeber and the year ended with a bang with 'Simmba' releasing on 28th December.

It is quite evident that it not the claiming ' Super Stars' that draw people's attention, but the theme, real content is what people ask for and so its did even in 2019 as it brought audience to the big screens to watch 'Uri: The Surgical Strike'. Also see: How team 'Uri' are combating piracy

'Simmba', 'Kedarnath', 'KGF' and 'Uri: The Surgical Strikes', had excellent stories and have been the talk of Bollywood for the past month.

Interestingly, while they have all been successes at the box office, each of the films were quite different from the other.

'Kedarnath' revolved around a love story set in the backdrop of the catastrophic floods that rocked Uttarakhand in 2013. The movie was the stepping stone for Sara Ali Khan in Bollywood. 'Kedarnath' crossed over Rs 50 crore at the box office, despite mixed reviews.

'Simmba', starring Ranveer Singh and Sara, made over Rs 230 crore at the box office, and continues to do well. 'Simmba', directed by Rohit Shetty, told the story of a corrupt cop who turns to the righteous path after his sister is brutally raped and killed. The film featured Ajay Devgn, Akshay Kumar and the team of 'Golmaal' - Tusshar Kapoor, Shreyas Talpade and Arshad Warsi - in special appearances.

Actor Vicky Kaushal's 'Uri: The Surgical Strikes' has received a wonderful response at the box office. The movie has been creating havoc at the box office ever since its release on 11th January. The film has crossed Rs 50 crore within the first week of its release. The film told the tale of the surgical strikes conducted on Pakistan militant launchpads.

Trade analyst Taran Adarsh took to Twitter to appreciate the hits of 2019.

#Kedarnath, #KGF [Hindi], #Simmba and now #UriTheSurgicalStrike... Four successes in one month [7 Dec 2018 to 11 Jan 2019]... Moral of the story: The audience is willing to dig into pockets if the films are worth it... Content talks! pic.twitter.com/PCR1V9lQI6

Let's all enjoy this ride of good content films hoping that there is never a dearth of good cinema for film lovers.