Shreyas Talpade: When she grows up and watches 'Lion King', she will hear her dad's voice 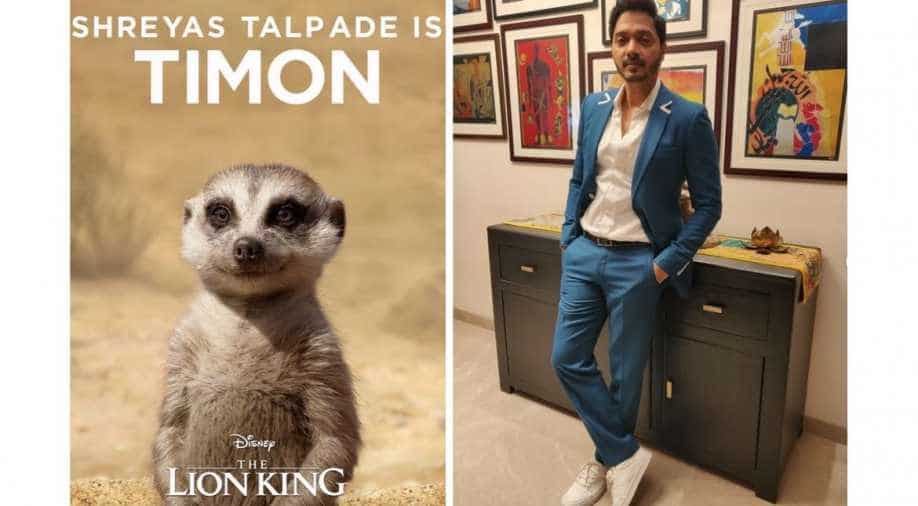 Shreyas Talpade, who was part of the cast of the Hindi version of 'Lion King' spoke to WION about the expected success of the film, singing and dubbing in an anime for the first time and doing this film as a future gift for his toddler.

Disney has had a great year at the box office so far with a variety of films that the studio has released raking millions in collections worldwide. One such recent film that ticked both in India and worldwide is the live-action remake of classic film ‘Lion King’ that earned more than Rs 150 crore in the Indian market.

Directed by Jon Favreau, it released in India on July 19, 2019 in both Hindi and English language. Indian actor Shreyas Talpade, who was part of the cast of the Hindi version of the film spoke to WION about the expected success, singing and dubbing in an anime for the first time and doing this film as a future gift for his toddler.

Shreyas played the funny and edgy Meerkat named Timon in the film who befriends a warthog, Pumba as the two forge a great bond throughout the film, On the role, he admitted that it “was one of the happiest moments of my life because it’s none other than the ‘Lion King’, one classic of a film.”

Apart from dubbing in ‘Lion King’ in Hindi, he also sung the cult song, ‘Hakuna Matata’ that has been a fan favourite since time immemorial. “When you listen to the Hindi soundtrack and find your name in the list singing the iconic song by Hans Zimmer, a song probably created by Sir Elton John at some point; all these factors plus the worldwide response to the remake makes me feel happy to be a part of such a successful venture. I can only thank God for giving me this opportunity to work in this film,” he said.

Shreyas stumbled upon the opportunity as a friend of his put him through to Disney India that was looking to cast Bollywood actors for Hindi dubbing. The offer got his attention on the first go as he was told that he was to dub instead of act in a film. This is the first time that Shreyas has dubbed for an animation film.

As for singing, it so happened that when he went to dub for the film, he started humming ‘Hakuna Matata’ as he heard a little kid recording the song for little Simba in the dubbing studio. He narrated, “When my dubbing director heard me humming, she asked if I could sing. I told her I could but only in the bathroom. Sunaina, our sound director then asked me to do a sample. She told me to forget about the tone or the rhythm and just sing. As I started singing, they said it was perfect.”

“The idea that whenever the song appears, whichever platform, it will have my name on it got me really excited. It was a big motivation for me. ‘Hakuna Matata’ by Shreyas Talpade was huge,” added the actor happily.

The film was on most accounts very different from an average movie in its making process. Shreyas explained, “It was a bit challenging because usually in animation films, the characters tend to have an exaggerated expression but this was live-animation so it didn't have too many expressions per se.”

“The great thing about Lion King was that all of us looked at it as one independent Hindi film. It was not dubbing for us. It was like making a separate Hindi film, adding a little bit of value in our parts,” he added before saying that they finished dubbing in just 4 days.

Shreyas considers being a part of this iconic film a gift for his daughter who is a little over a year. He said, “It was a very special thing for me, almost like a gift that I wanted to give her. So whenever she grows up and would want to watch Lion King, she would hear her dad’s voice. I just want to see her reactions at that point in time. It has to be very special for her.”

If you find yourself spinning...you certainly have a daughter. Cause daughters have this special knack of spinning you around their little fingers. Happy Daughters Day! Aadya ❤️

The actor who is mostly seen in comedy films also spoke about the consumption pattern of the audience changing over time as films that were originally meant for kids is now a hit with adults. “There is a child in all of us. Thanks to Iron Man and Avengers of the world, the whole movie experience for us has changed. For example, whenever a character would turn into a father, even if they are just 40-45 years of age, their body language would be that of 70. Me as a father, I don't behave that way. Things have changed,” he said.

He continued, “We want superheroes now. We have more such films coming now than before.”

As we got ready to wrap up the chat, Shreyas mentioned that he is working on a horror-comedy as of now. “I am also a part of a film in Marathi, a biopic of-sorts. We will be producing a film in Marathi this year and probably might direct a film next year,” he said.