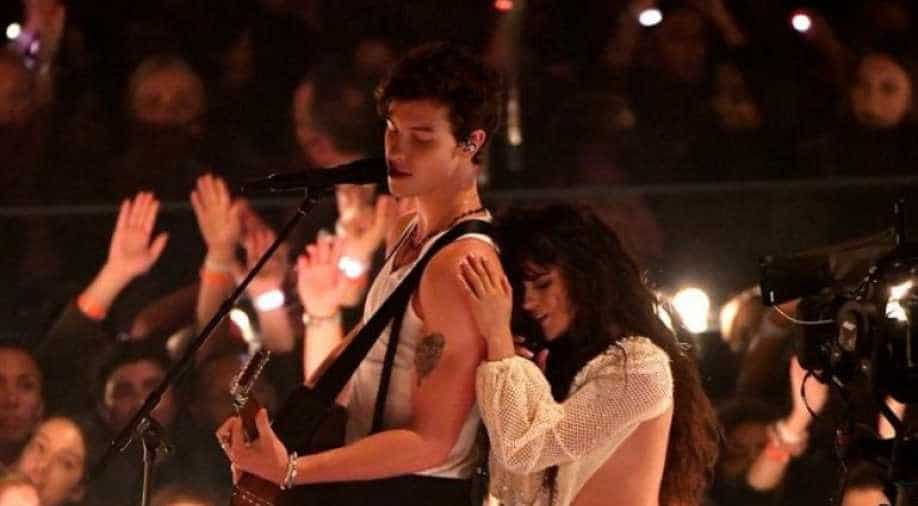 Shawn Mendes and Camilla Cabello during their performance at MTV VMAs. Photograph:( Twitter )

Cabello and Mendes set the stage on fire with their steamy performance which had Mendes playing the guitar as he crooned an acoustic version of the song with his lady love.

That Camilla Cabello and Shawn Mendes are now dating is a known fact, but on Monday night, the world got to see the electrifying chemistry the two shared as they performed together to the hit song 'Senorita' at MTV Video Music Awards.

Cabello and Mendes set the stage on fire with their steamy performance which had Mendes playing the guitar as he crooned an acoustic version of the song with his lady love.

The performance became a talking point on the internet in no time. Watch their performance to know why.

#VMAs are over, but we’re still waiting for that kiss tho 👀 @Camila_Cabello @ShawnMendes pic.twitter.com/0dBpbiBFa5

in what world have i just watched the jonas brothers be disappointed in shawn mendes not kissing camilla cabello pic.twitter.com/QrCUXU2p2K

Such an intimate experience. The close ups were everything. Camila Cabello did what she had to do! #vmas

'Senorita' is the second collaboration between Mendes and Cabello. They had earlier sung 'I Know What You Did Last Summer' which was released in 2015. But rumours of their romance started doing the rounds only this year as the two were  was spotted repeatedly packing on the PDA following the release of their new duet.

According to TMZ, the duo was spotted kissing over a coffee in San Francisco. They were also seen kissing and spending quality time on various occasions.

On Monday, the two also won the Best Collaboration Award for the track.