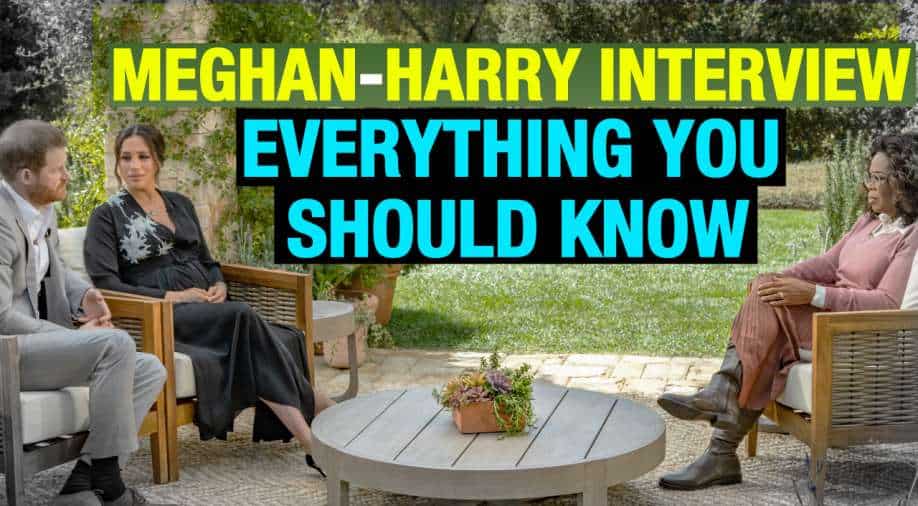 Meghan Markle-Prince Harry open up like never before in tell-all Oprah Winfrey interview. For the first time, Meghan Markle reveals she contemplated suicide before the couple left UK.

As the couple stepped back from their “royal duties” last year, Meghan revealed how baby Archie, before he was born, raised concerns among the royals of how dark his skin will be, and whether they will consider making him a prince, among many other things

Meghan Markle and Prince Harry opened up like never before in the Oprah Winfrey interview that aired on March 7 on CBS. From addressing rumours around who made who cry before her wedding with Harry, her equations with the royals, how baby Archie was perceived by the “institution” and having suicidal thoughts, Meghan and Harry gave explosive details of their life.

As the couple stepped back from their “royal duties” last year, Meghan revealed how baby Archie, before he was born, raised concerns among the royals of how dark his skin will be and whether they will consider making him a prince. Without naming anyone, Meghan said royals had “concerns and conversations about how dark his skin might be when he is born.”

“In those months when I was pregnant ... we have in tandem the conversation of ‘He won’t be given security. He’s not going to be given a title,’ and also concerns and conversations about how dark his skin might be when he’s born,” she said.

The comments were made to Harry who then told her. When asked if she could identify them, Meghan said, “I think that would be very damaging to them.”

It all left a toll on Meghan’s mental health who revealed in the interview that she was suicidal. She had contemplated suicide prior to the couple’s break from the royal family. “I was really ashamed to say it at the time, ashamed to have to admit it to Harry — especially because I know how much loss he’s suffered. But I knew if I didn’t say it, that I would do it. I just didn’t want to be alive any more. That was a very clear and real and frightening constant thought. I remember how he just cradled me.”

Harry also said he has been cut off financially from his family since the first quarter of 2020. It’s only after that they signed deals with Netflix and Spotify. “That was never part of the plan,” Harry said. Financially, he said, he is dependent on the inheritance left to him by his mother, the late Princess Diana, who was similarly hounded by tabloids and paparazzi before her untimely death in 1997 at the age of 36.

Harry was cut off from father Prince Charles for the longest time when he “stopped taking calls”. However, the couple have good relations with Queen Elizabeth. Harry said, “I’ve spoken more to my grandmother in the last year than I have done for many, many years. My grandmother and I have a really good relationship, and an understanding, and I have a deep respect for her.”

On his love for elder brother Prince William, Harry said, “We’ve been through hell together. We have a shared experience. But we’re on different paths.” Pressed by Winfrey, Harry said, “The relationship is space at the moment. And time heals all things, hopefully.”

Meanwhile, Meghan Markle spoke about the “crying” episode that was the talk of the town as rumours went around that she made Kate Middleton cry before her wedding with Harry. Read details here.

The couple also revealed the gender of their second child. Read here.