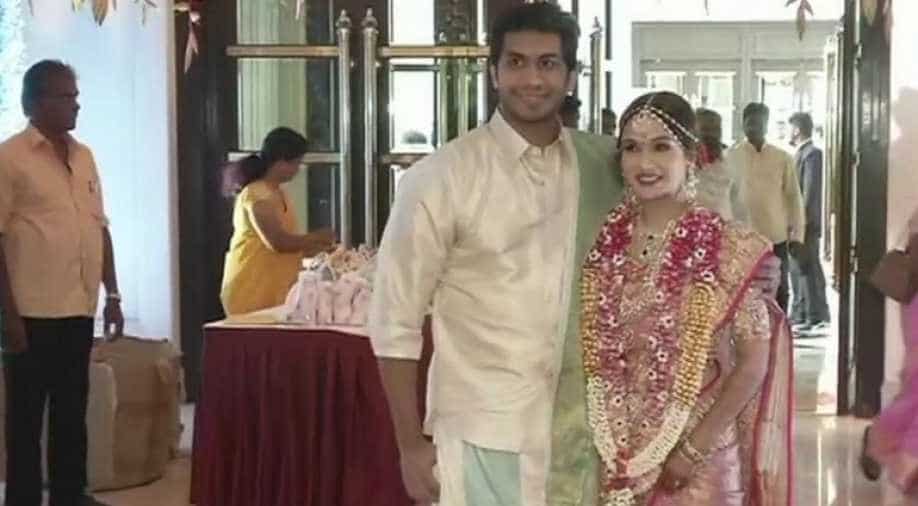 Soundarya had taken to her Twitter page to share a few moments from the pre-wedding celebrations as well.

Rajinikanth played the perfect host as his younger daughter Soundarya got married Vishagan Vanangamudi at the Leela Palace Hotel in Chennai on Monday.

Soon after their wedding ceremony got over, the couple posed for the media who had lined up since morning to click the newlyweds.

Soundarya wore a heavy embroidered pink saree for her wedding which was designed by Abu Jani Sandeep Khosla.

Veteran actor Rajinikanth was earlier seen arriving at the venue where his younger daughter wed the actor-businessman.

Tamil Nadu: Actor Rajinikanth and other guests at The Leela Palace hotel in Chennai where his daughter Soundarya Rajinikanth is tying the knot with actor Vishagan Vanangamudi today. pic.twitter.com/SwtLjRrouG

Rajinikanth`s elder son-in-law Dhanush too was seen arriving at the event wearing a white kurta.

Soundarya had taken to her Twitter page to share a few moments from the pre-wedding celebrations as well.

She captioned the post, "Blessed & grateful beyond words !!!! The three most important men in my life ... my darling father ... my angel son ... and now you my Vishagan."

This is Soundarya and Vishagan`s second marriage.

Rajinikanth`s younger daughter was earlier married to businessman R Ashwin, with whom she has a three-year-old son.