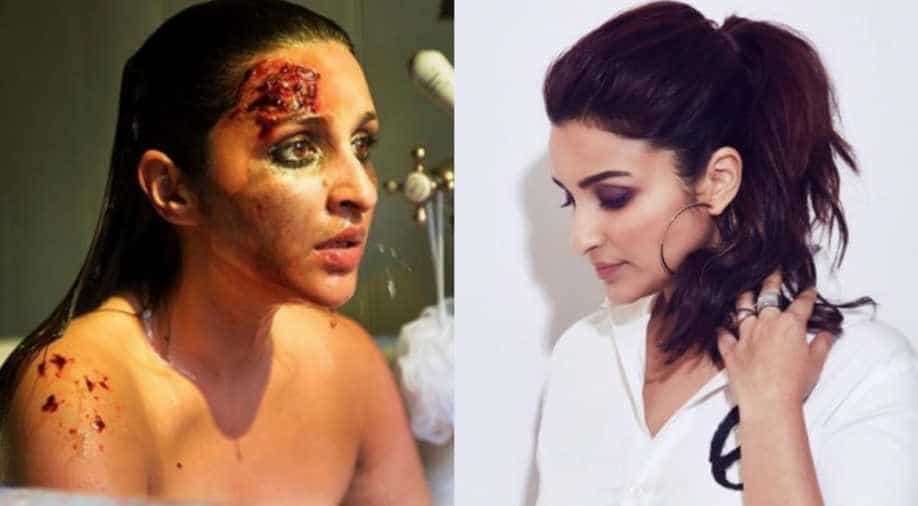 Parineeti Chopra in 'The Girl On The Train' remake Photograph:( Twitter )

‘The Girl On The Train’ will also see actor Kirti Kulhari as a British cop.

We have been updating you on the developments of Parineeti Chopra’s next film, the official Hindi remake of ‘The Girl On The Train’ as she shoots for it in the UK.

The actress recently revealed the first look from the film as she looks bloodied and bruised. Sporting an injury on her forehead as she looks visibly shaken in the first look, Parineeti captioned the image, “Something I’ve never done before. And the most difficult character I have ever played in my life. #FirstLook #TheGirlOnTheTrain @reliance.entertainment @sarkarshibasish @amblin.”

Reliance Entertainment also shared two pictures from the film featuring the actress. Parineeti, if nothing else, looks dark and sinister -- setting the mood for the film. While we have seen the original film starring Emily Blunt that came out in 2016, Parineeti’s story will have a change of circumstances and backdrop.

Something I’ve never done before. And the most difficult character I have ever played in my life.💥 #FirstLook #TheGirlOnTheTrain @reliance.entertainment @sarkarshibasish @amblin

A post shared by Reliance Entertainment (@reliance.entertainment) on Aug 20, 2019 at 9:35pm PDT

Parineeti has also got a change of hair colour for her character in the film.

‘The Girl On The Train’ will also see actor Kirti Kulhari as a British cop. It is directed by Ribhu Dasgupta and will also star Aditi Rao Hydari.

The film is based on the 2015 bestseller by Paula Hawkins as it narrates the story of a divorced woman who gets entangled in a missing person's investigation that throws her life to the brink. It was originally adapted into a Hollywood film by Steven Spielberg’s DreamWorks Pictures. It was directed by Tate Taylor. Emily received a nomination for her performance at the 23rd Screen Actors Guild Awards, as well as a BAFTA nomination for Best Actress in a Leading Role.

The film is scheduled for a release in 2020.