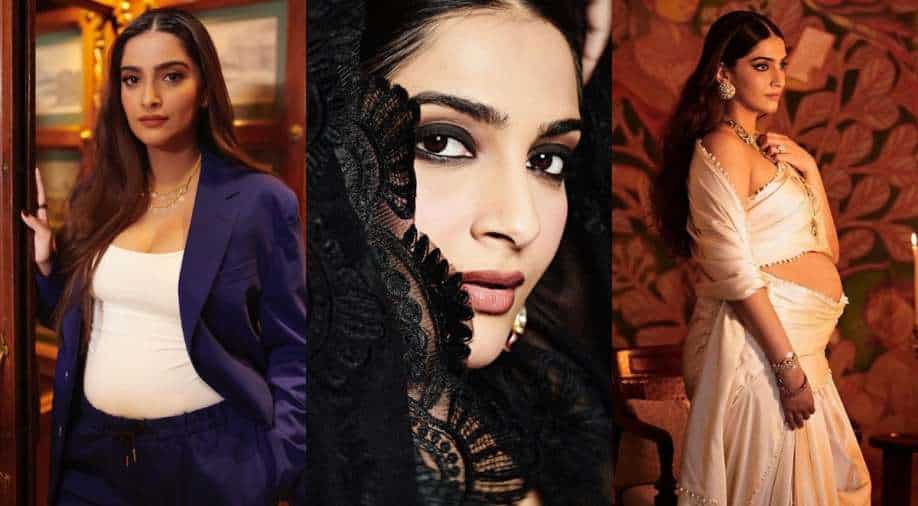 Mom-to-be Sonam Kapoor is a fashionista in its literal sense. And, just as she aced all of her looks before pregnancy, she is bringing her maternity fashion A-game forward these days as well.

In the fashion industry and among critics, she is known for her style sense. On award shows, runways and shoots, she leaves no stone unturned when it comes to shelling major fashion goals. And, many look up to her for tips and advice.

Ever since Sonam announced her pregnancy in March, she has been dropping gorgeous maternity looks on her digital style file. Here's a compilation of the best ones so far.

Vision to behold in black kaftan

The 36-year-old actress wore this beautiful black see-through kaftan for a photoshoot. While flaunting her baby bump, the diva posed gracefully for the lens.

Sonam opted for simple yet stunning Indian attire for a shoot with her husband Anand.

In a pristine ivory Abu Jani & Sandeep Khosla creation, Sonam looked absolutely divine. Along with the luxe ivory saree featuring pearl detailing along the borders, she wore a bandeau blouse that allowed her to flaunt her growing bump fashionably.

Chic yet casual in blue-white suit

This time, the actress decided to flaunt some androgynous fashion in a pantsuit from Paul Smith’s menswear collection.

In the last maternity look, Sonam is seen donning a black bodysuit that accentuated her curves in the best possible way.

Sonam and Anand are currently enjoying their babymoon and having the time of their lives in Italy. The actress recently entered the third trimester of her pregnancy. And, marking the special time, her husband penned a sweet note for the mother-to-be.