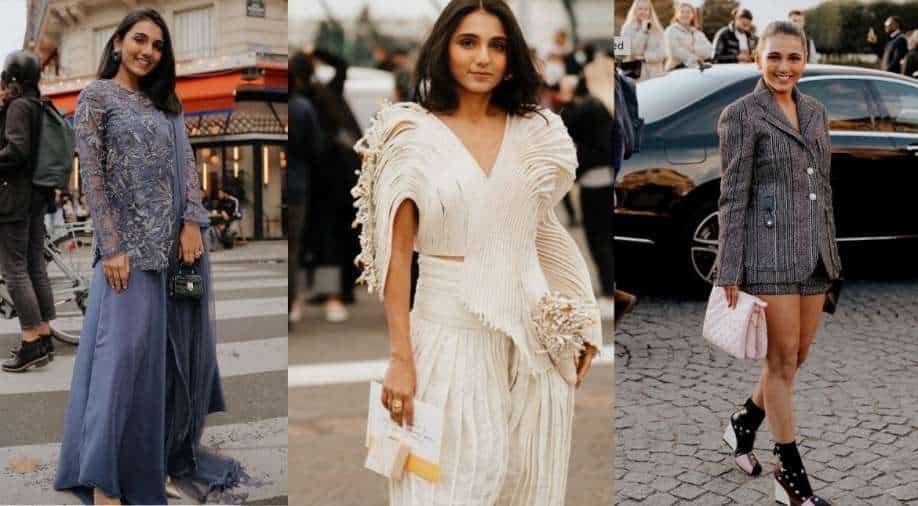 Paris Fashion Week being the second international event she made way for right after Cannes, the Indian blogger chose an interesting lineup of Indian brands as her outfit choices for the Parisian streets.

Indian fashion blogger Masoom Minawala stunned with her fresh looks at the Paris Fashion Week as the world’s most coveted fashion week came to a close.

Paris Fashion Week being the second international event she made way for right after Cannes, the Indian blogger chose an interesting lineup of Indian brands and material for her appearances at Paris. She told publications about how she carefully opted for Indian brands so that when people ask her about her outfits, she can proudly flaunt her Indian heritage and Indian handlooms.

She attended the Hermes show at Paris Fashion Week wearing a stunning white khadi ensemble from Vaishali S Studio’s couture collection. She paired it with minimal makeup and accessories and let the outfit do the talking.

She was also seen wearing a gorgeous green co-ord set from Imad Eduso consisting of a one-shoulder top with dramatic sleeves and matching pants. Masoon was also seen in a pant suit from Joskai Studio.

Next day, the fashion blogger also sported a cool and chic look as she was seen wearing a pink sweatshirt by designer Dhruv Kapoor with the word ‘Kapoor’ engraved on it in Hindi. It was paired with a matching short skirt.
Also Read: Gucci to Saint Laurent: Luxury fashion brands that are vegan, eco-friendly and anti-fur

On the last day of the Paris Fashion Week, she also attended the Louis Vuitton show where she was head-to-toe in Louis Vuitton including the shorts and blazer look she completed with a pink satchel and matching boots.