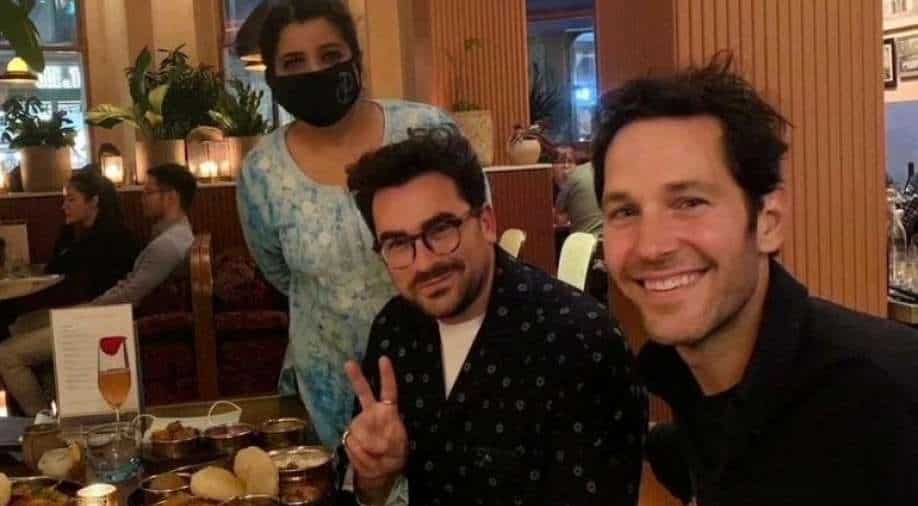 Asma Khan, the founder of the restaurant took to Twitter to share a picture of herself with Dan and Paul.

Ant-man Paul Rudd and Canadian sitcom 'Schitt's Creek' actor Dan Levy recently enjoyed Indian food thali at a London restaurant. The actors were snapped dining together at the Darjeeling Express, an Indian eatery that was featured in Netflix’s 'Chef's Table'.

The picture showing the actor all smiling and posing alongside a table full of Indian food and delicacies including puri, laddoo and many more things. The viral photo caught desi fans eyes and left them discussing several things.

When Paul Rudd returns to your restaurant and brings Dan Levy with him!!! pic.twitter.com/pkRtnF9pDt

Asma Khan, the founder of the restaurant took to Twitter to share a picture of herself with Dan and Paul. "When Paul Rudd returns to your restaurant and brings Dan Levy with him!!!". Paul had previously visited the restaurant in July this year.

In the viral picture, Dan, as usual, sported his signature glasses showing a peace sign at the camera, while Paul is simply smiling and posing.

The viral picture also caught celebrity attention as producer and actor Mindy Kaling took to Twitter to react to the same and tweeted, "I saw that pic of Paul Rudd and Dan Levy eating Indian food together and made it about me somehow."

Fans also were delighted to see them dining together, some noticed Paul Rudd good looks and how he hasn't aged even a bit, meanwhile another thaught 'Schitt's Creek' star is in 'Ant-Man 3.

Is it your food, Asma, that keeps Paul Rudd looking so young? @danjlevy joined Paul for some delicious elixir of youth? https://t.co/VdsBKpnTit

Paul Rudd and Dan Levy eating out of a Thali together, is the image I could never imagine

PAUL RUDD AND DAN LEVY TOGETHER I SHALL DIE IMMEDIATELY

So Dan Levy is probably in the MCU, right? Be weird if he just happened to be having lunch with Paul Rudd in London during filming of Quantumania?

Paul Rudd has stopped ageing at 28. What sorcery is that!!!