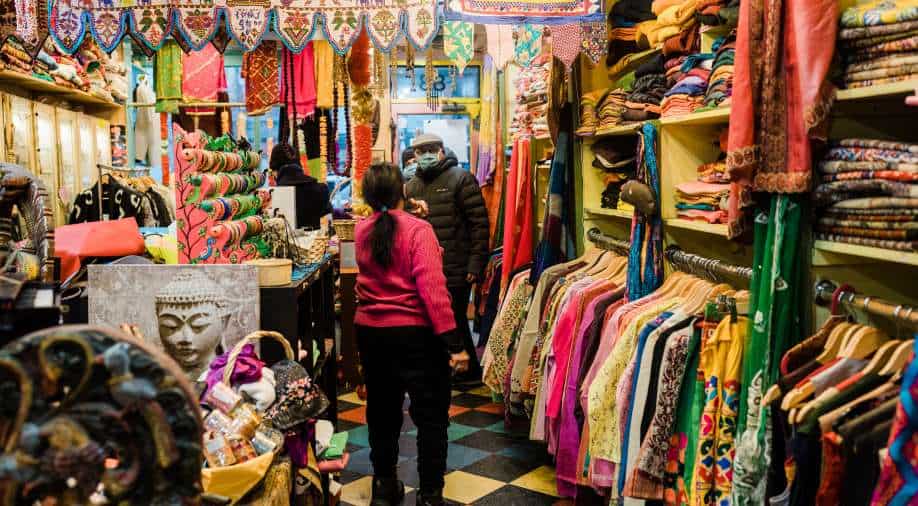 For decades, the couple would travel to India to find one-of-a-kind objects to sell. “My husband walked from village to village to collect all these things. He had a very unique taste,” Saroj Goyal said, picking up a hand-beaded textile

Walking into Dress Shoppe II is like walking into an emporium of colour and cloth. The shelves are overflowing with hand-embroidered fabrics and saris, the racks are tightly packed with kurtas and salwar suits, and even the ceilings are covered in intricate tapestries. Below the main floor of the shop, there are two storage floors packed with piles of additional product. All of it needs to go by Jan. 31.

After nearly 50 years of business, the treasured East Village store is shutting down. Following nearly two years of pandemic-related struggles, combined with a landlord dispute, the loss of her husband and her own health problems, Saroj Goyal, the owner, decided that closing the store was the best choice.

“Every moment is special here,” said Goyal, 72, as she sat sipping hot tea on a December afternoon. Every so often, she paused the conversation to help a customer who had wandered in, sharing suggestions and telling them to check out the shop’s Instagram.

Goyal and her husband, Purushottam Goyal, emigrated from Delhi, India, in the 1970s. It was his idea to open the business in 1977; the shop soon became a slice of South Asia in Manhattan.

For decades, the couple would travel to India to find one-of-a-kind objects to sell. “My husband walked from village to village to collect all these things. He had a very unique taste,” Saroj Goyal said, picking up a hand-beaded textile.

In September 2019, Purushottam Goyal died, a loss that still pains Saroj Goyal every day. The store now holds several mementoes of his life. “My husband made me laugh so much in this room. All day every day, we were together for 50 years in this shop,” Goyal said, tearing up.

There’s a portrait of Purushottam Goyal hung high on the back wall and a book filled with handwritten tributes to him from customers on the checkout counter. “The world is a little less good with his passing,” one person wrote. Another: “Your presence is missed physically, but your spirit is all around this place.”

On top of grieving his loss, Saroj Goyal had to figure how to keep the store running; administrative matters had been her husband’s domain.

In February 2020, she called up her landlord, the Cooper Square Mutual Housing Association II, to discuss rent. Cooper Square manages low-income housing co-ops on the Lower East Side; rents in those buildings are subsidized by income from the company’s commercial properties. Goyal set up an appointment over the phone with someone from the office, but when the time came, she said, no one showed up.

Later that month, a representative from Cooper Square came to the shop unannounced and demanded a lump-sum payment of all the missed rent, Goyal said. Soon after, the pandemic arrived, and it was difficult for the shop to rake in any sales at all for several months. Then, in February 2021, she was diagnosed with breast cancer. About four months later, in June, Cooper Square sued her for more than $265,000.

“We’re sad to see Dress Shoppe go, but we have to remain a fiscally solvent project,” said Dave Powell, the executive director of Cooper Square. “We respectfully but categorically dispute Ms. Goyal’s characterizations of the interactions that she’s had with staff.” Powell added that the Dress Shoppe occupies their largest commercial space. “So not having a rent-paying tenant at that storefront was a significant blow to our co-op’s financial health,” he said.

Meanwhile, Goyal’s story caught the attention of the internet.

In December 2020, Nicolas Heller paid the shop a visit and posted about it on his Instagram page, @newyorknico, which has more than 760,000 followers. “When I do these posts, the reaction is always positive, but some businesses resonate more than others. With this one, there were so many people commenting with memories shopping there, of Saroj’s husband, just beautiful anecdotes about the shop,” he said.

Supermodel Bella Hadid reposted Heller’s photos, writing, “please please please Let’s go visit @dressshoppenyc & Mrs. Saroj Goyal to show her some loving support !!! She has devoted her life to this business and we need to remind her of how important she is!”

Brandon Stanton, the creator of the blog Humans of New York, which has more than 17 million followers on Facebook, wrote a post on Goyal in July. “When I met her, I was very moved by her story and her kindness,” he said. Goyal being kept out of the loop on the inner workings of the business left her in a vulnerable situation, Stanton added, which was something that his readers empathized with. “A lot of people recognized similarities in their own cultures, or the interactions between their own older parents or women in their lives.”

He said he also helped mediate a deal between Goyal and the landlord, and they came to the agreement that Goyal would pay Cooper Square $130,000 and give up the shop by the end of January. Stanton started a GoFundMe to collect donations for Goyal, which raised nearly $500,000.

For the shop’s many loyal customers, the news of its closing is emotional.

Nadine Hanson, 30, first discovered Dress Shoppe II in 2014, the year she had moved to New York. “I grew up in a small town in Wisconsin, and I was exposed to very little South Asian culture there,” she said. Hanson, a waitress, eventually became close to Goyal, and the two even spent Christmas Eve together in the store in 2020. “I feel like she’s family now,” Hanson said.

“The East Village is changing so much, has changed so much, and this is another nail in the coffin,” said Jenny Goldberg, a 39-year-old therapist. “Dress Shoppe is a place I could always walk in and be greeted with love and stories, offerings of tea. It was a little sanctuary in the middle of the busy city.”

Kate Mueller, 28, a graduate student who worked in the store part time, said that her favourite memories there were the long chats she had with Goyal. “In between helping organize things, we would just sit and talk about life,” she said. “It’s these types of stores that are the lifeblood of this city.”

Now, Goyal’s focus is on selling as much of her stock as possible before she has to vacate the property at the end of the month. She has an Etsy store, which Hanson helped her set up, and she’s planning to create her own online shop to keep the business alive.

But Goyal will miss the brick-and-mortar shop. “I love talking to the customers and dealing with them directly,” she said. “I’m very grateful for the East Village, for my customers for giving me all of their love and support.”