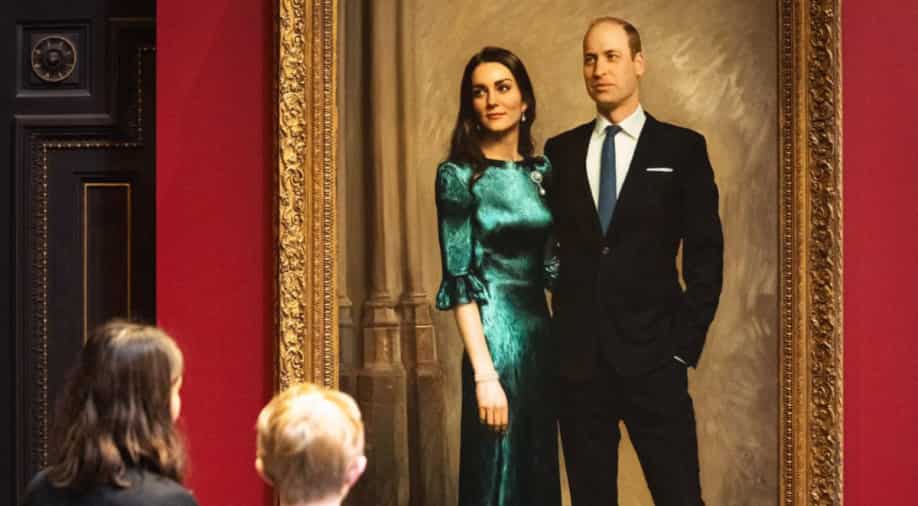 Kate is wearing the same emerald green dress by designer The Vampire’s Wife, that she wore during her trip to Ireland in 2020.

The Duke and Duke of Cambridge's first official joint portrait is out and they are looking breathtaking. On Thursday, Kate Middleton and Prince William unveiled their first painted portrait during their visit to the Cambridgeshire, a county town, in Cambridge.

During their outing, Kate and William first stopped at the University of Cambridge’s Fitzwilliam Museum to view their first portrait. Reacting to the poster, William said, ''It's quite big.'' The beautiful portrait of William and Kate was painted by ace-British artist Jamie Coreth, who has also painted the portrait of other British Royals in the past.

Delighted to see this new portrait unveiled at the @FitzMuseum_UK in Cambridge today!

The picture shows Kate in a shiny green dress and matching heels, all paired with a diamond bracelet of Queen Elizabeth with open hair. Meanwhile, William is wearing a black suit with a white shirt and blue tie and both of them are looking elegant.

Kate is wearing the same emerald colour dress by The Vampire’s Wife, which she wore during her trip to Ireland in 2020.

"It has been the most extraordinary privilege of my life to be chosen to paint this picture," Coreth said via People. "I wanted to show Their Royal Highnesses in a manner where they appeared both relaxed and approachable, as well as elegant and dignified."