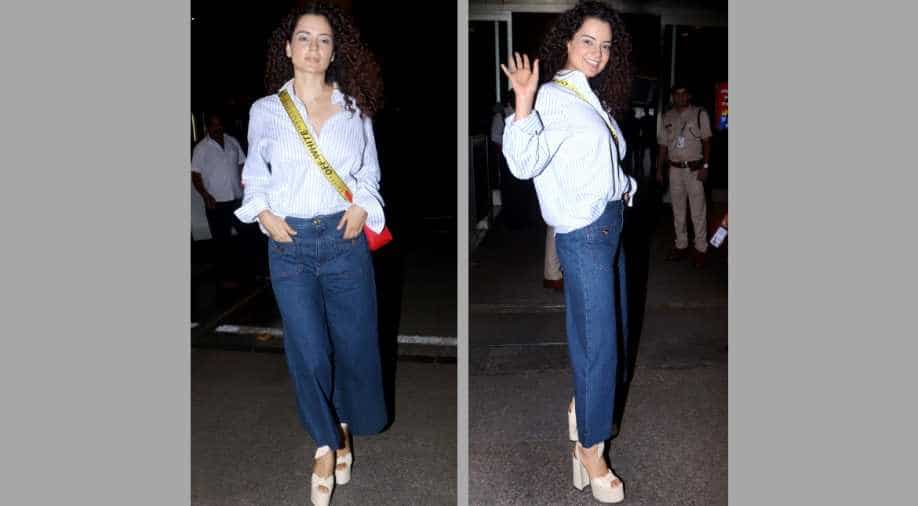 Kangana made her debut at the film festival last year.

After a scintillating debut at the Cannes Film Festival last year, Indian actress Kangana Ranaut was spotted leaving Mumbai yesterday for yet another year of display of beautiful dresses and some elan at the festival.

Kangana looked happy and vibrant as she left for Cannes wearing denim, stiletto and striped shirt with a body-cross bag. She posed for the paps who were waiting for her at the airport.

Kangana’s dates however not confirmed are tentatively slotted between May 16 and 18. Along with her, other Indian beauties like Aishwarya Rai Bachchan, Deepika Padukone and Sonam Kapoor will be seen. Huma Qureshi will also be there. Among other debuts that we will see this year are from Priyanka Chopra and Diana Penty.

The first among the Indian actors spotted at this year's Cannes was Hina Khan who came dressed in a Ziad Nakad gown.

As for what Kangana will be wearing, she revealed earlier that her stylist and designers Falguni And Shane Peacock have created a unique saree for her. She told Pinkvilla, "Ami (Patel, her stylist) and I are very conscious of dying weaves and poor condition of our Indian weavers. So, we have collectively decided to endorse our own. Even though I will be wearing various outfits, the sari will be the biggest highlight."

Kangana represents vodka brand Grey Goose and is attending the film festival for the second time.