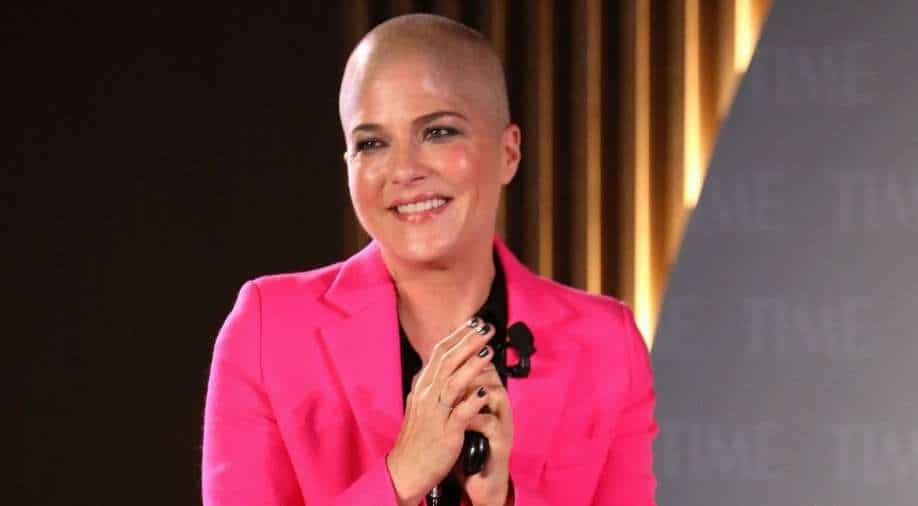 For Selma Blair, no day is free from the effects of multiple sclerosis, the autoimmune disease that she learned she had in 2018 but that she believes began attacking her central nervous system many years earlier.

Selma Blair could only talk for a half-hour in our first session. That was as long as she trusted her brain and her body to cooperate — any longer and she feared that her focus might start to wander or her speech might begin to trail. “We’re being responsible in knowing that smaller moments will be clearer moments,” she said.

For Blair, no day is free from the effects of multiple sclerosis, the autoimmune disease that she learned she had in 2018 but that she believes began attacking her central nervous system many years earlier.

This particular Friday in September had started out especially tough: She said she woke up in her Los Angeles home feeling “just bad as all get out,” but she found that talking with people helped alleviate her discomfort. Blair said she had had good conversations earlier in the day and that she had been looking forward to ours.

So, if she needed to take a break during this interview, she said with a delighted cackle, “it just means you’re boring me.”

An unparalleled lack of inhibition has always defined Blair’s best-known work. She is 49, with a resume that includes seminal works of teensploitation (“Cruel Intentions”), comedy (“Legally Blonde”) and comic-book adventure (“Hellboy”).

That same unbridled bluntness persists in all her interactions, whether scripted or spontaneous, with cameras on or off, even when she is sharing her account of the time she went on “The Tonight Show” wearing a strappy top she accidentally put on sideways. It is a story she told me proudly, within five minutes of our introduction on a video call, while her fingers made a maelstrom of her close-cropped, bleached-blond hair. (By way of explaining this style choice, she burst into a brassy, Ethel Merman-esque voice and sang, “I want to be a shiksa.”)

But Blair’s candor has come to mean something more in the three years since she went public about her MS diagnosis. Now, whether she is posting personal diaries on social media or appearing on a red carpet, she understands she is a representative with an opportunity to educate a wider audience about what she and others with MS are experiencing.

It is a philosophy of maximum openness that she is taking further by appearing as the subject of a new documentary, “Introducing, Selma Blair.” The film, directed by Rachel Fleit, is an unflinching account of Blair’s life with MS and the stem-cell transplant she underwent to treat it in 2019. (The documentary will be released in theaters Friday and will begin streaming Oct. 21 on Discovery+.)

As Blair explained, she was hopeful that the film would be meaningful to viewers who feel challenged and uncertain, whether or not they have a chronic illness. Selma Blair reveals she had 'made plans for dying' in trailer for new film on struggle with multiple sclerosis

“This is my human condition,” she said, “and everyone has their own, but I think we are united in feeling alone or frightened when we have a big change in our lives. This wasn’t a vanity project at all, and I’m very capable of loving vanity.”

For Blair, the documentary is just one piece of a larger effort to understand herself — to determine how much of her identity has been shaped by her disease, and what will remain or change now that she is being treated for it.

“If this had happened in my 20s, when I’m trying to start a career and set a few shekels aside, I would have been mortified,” she said. “I’m old enough now. I’m getting to know a whole different personality, and I’m not ashamed.” Also Read: Kate Middleton champions sustainability as she wears 2011 gown again

Thinking back to her upbringing in suburban Michigan, Blair described herself as a 7-year-old who toted around her own copy of the Physicians’ Desk Reference, the massive tome of information on prescription drugs, and wondered why she experienced constant pain, fatigue and unpredictable mood swings.

These difficulties persisted into adulthood: The pain got worse, particularly after the birth of her son, Arthur, in 2011; she had problems with her vision and experienced involuntary muscle contractions in her neck.

Until she received her diagnosis, Blair said, she couldn’t understand why her symptoms varied from setting to setting. “I can walk better in my house, but outside it’s like a sand pit,” she said. “With certain light, my speech becomes intermittent even though my larynx is fine.”

“It never occurred to me that there’s a traffic jam that happens in my brain,” she said.

In the flurry of attention that followed Blair’s disclosure of her diagnosis, she was introduced to Fleit, and they agreed to start shooting the documentary in the days just before Blair traveled to Chicago for her stem-cell transplant.

Fleit said Blair exercised no editorial control over the film, adding that the endeavor would succeed only if the actress “was willing to show the world what really happened — that brutal intimacy and honesty that you just don’t see — and she was totally open to that.”

Fleit, who has alopecia universalis, an autoimmune disease that causes hair loss, said she felt a particular connection to Blair as filming proceeded.

“Being a bald lady in the world has given me unique access to a certain kind of emotional pain,” Fleit said. “It does not frighten me anymore, and I feel uniquely qualified to hold the space for another person who’s experiencing that.”

But not everyone in Blair’s life was immediately comfortable with her pursuing both the film and the stem cell transplant. Sarah Michelle Gellar, Blair’s “Cruel Intentions” co-star and longtime friend, said that she was fearful about the treatment, which was accompanied by an intensive chemotherapy regimen.

“I just felt like it was so risky,” Gellar said. “And her attitude was, yes, I’m managing right now, but in 10 years I might not be, and I won’t be a candidate for this treatment. It was now or never. And now or never is a very good definition of Selma.”

Gellar was also unsure about the film project — “I’m a very private person, I can barely share going to the supermarket,” she said — but she understood Blair’s position: She felt it was important for her son.

As Gellar recalled, “She would say, ‘God forbid, if I don’t make it, then Arthur has a whole video diary of what I went through. He’ll never have to wonder, did I give up? He’ll know how hard I fought to be there for him.’ ”

To Parker Posey, a friend and colleague of Blair’s for nearly 20 years, the decision to make a documentary was as much a legitimate form of expression as any other artistic enterprise.

“This is the only thing we have — your life as an actor, it’s all material, it’s all story,” Posey said. “Am I going to land in something that gives me meaning, away from the pettiness of most entertainment?”

Posey added, “Anyone who can find purpose in creating what they’re supposed to create and bravely live their life, that’s art. That’s the triumph.”

Blair, for her part, said that once shooting started on the documentary, “I don’t think I noticed. There was really no directing, and I mean that in the best way.”

She added, “I don’t think I’ve realized that a film is coming out where I’m the subject of it. I haven’t really processed that.”

With our half-hour coming to its end, we said our goodbyes, and I told Blair I looked forward to reconnecting with her in a few days. In a comically ethereal voice, she answered, “God willing, if I’m alive.”

Our next session, planned for that Monday, had to be delayed when Blair fell from a horse she was riding over the weekend. As she told me in a follow-up conversation — this time over the phone, as video calls were making it difficult for her to focus — she had lost her balance and hyperextended her thumb but was otherwise doing OK.

She was more embarrassed by how she felt she’d behaved in our first conversation, using her admittedly outrageous sense of humor to paper over her anxiety. “I get so spooked because there is still, even in my mind, a stigma of, you won’t bring it — you won’t be able to make this mind-body thing work,” she said. “I’ll use the defense of a shtick when I feel like I’m faltering.”

She was also bothered by a remark she had seen on her Instagram account from someone who offered support for her documentary but said, as Blair described the comment, “I wish a regular person were doing it, like a person that’s not a celebrity, because it’s not the same.”

Blair emphatically added, “I am a regular person.”