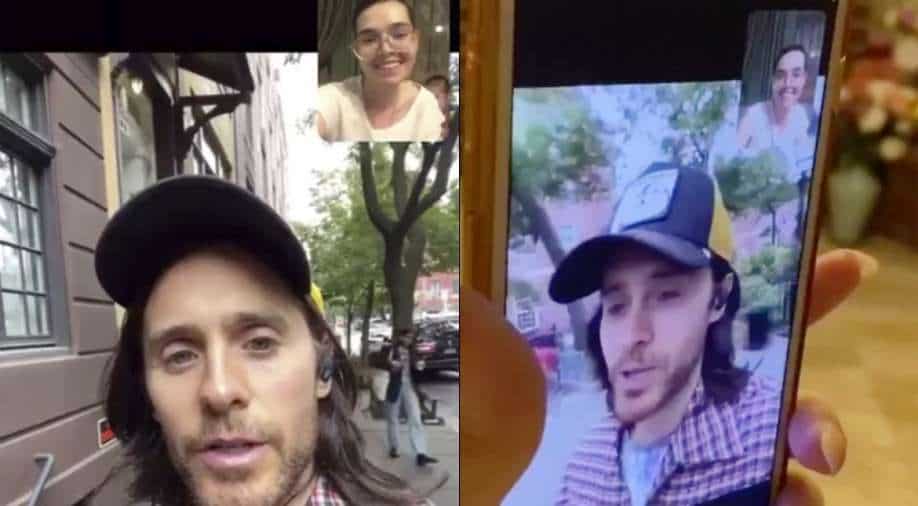 "I’m happy to see you!" said Anastasia Petrova, who reportedly lives in Moscow, told Jared Leto during the video call that was obtained by an international news website.

Oscar-winning actor Jared Leto is not just a brilliant actor, but has a heart of gold too.

As a surprise to a terminally ill Russian fan's, the 'Dallas Buyers Club' actor video called the major fan on her 27th birthday. If that does not make you cry, we don't know what would.

"I’m happy to see you!" said Anastasia Petrova, who reportedly lives in Moscow, told the actor during the video call that was obtained by an international news website. "You’re talking to me! It’s amazing!"

During the call, Petrova reportedly showed him a full-size cardboard cutout of himself that she has been harbouring for over a decade. The duo then went on to discuss pets, music, among other things, during their call.

"I see you smiling and I’m happy you’re smiling. I’m thinking about you over here and I’m happy to talk to you," Leto told her, reportedly.

Leto then asked Petrova about her health and how she was feeling, to which she replied saying she isn't doing great.

Leto said he wished he was there in person to give her a "big hug" and say "hello" to her family.
"You can give them a hug from me to them and I’ll be thinking of you over here," he told her.

The call between the superan and her idol was organized through Vera, a hospice care fund that works with terminally ill patients.

According to a local Russian outlet, Petrova’s brother, Maxim, got in touch with Vera and requested them to have this call arranged, saying, "My dream is for Jared to find out that there is this girl in Russia who is smart, beautiful, ambitious, and loving."

"Who believes in herself, in us, in the power of the [Thirty Seconds to] Mars family. I dream that she hears words of support, not only from me, her mum, and sisters but also from her long-time idol and friend Jared Leto," he continued.

No official statement or any public comment on this video call has been made by Leto's representatives.
Interestingly, the 'House of Gucci' actor was in the news just last week after he 'got caught' in an anti-vaccination protest in Rome.

"Got caught in a protest in Italy," he captioned a now-expired video on his Instagram Story. "From what I gather it was about vaccine mandates / green pass. Got tear gassed then called it a night," he had reportedly said in his video.