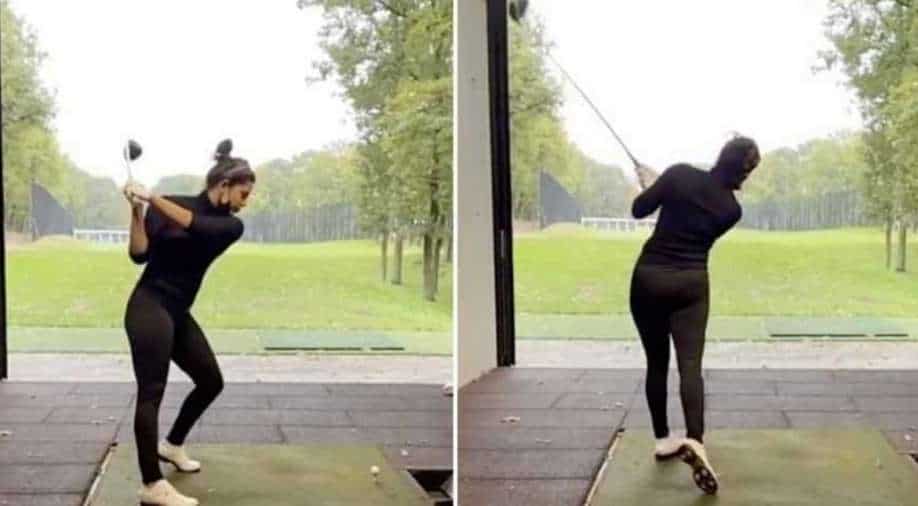 The global star is currently in Berlin, Germany as she shoots for Keanu Reeves starrer ‘Matrix 4’.

Priyanka Chopra has become a pro at golfing, or so it seems!

The global star is currently in Berlin, Germany as she shoots for Keanu Reeves starrer ‘Matrix 4’. The actress was recently seen playing golf in what looked like a fun session.

On Monday, she took to Instagram to share a video of herself from a golf course--Golf und Land Club. The video shows her in an all-black outfit, with her hair tied in a high bun. “In between ‘shots’ #PracticeMakesPerfect Thanks for your help @thlpntzk,” she wrote.

Last week, Priyanka shared a picture from the streets of Berlin as she took her pet dog Diana for a walk. “Alles wird gut. Everything will be ok #IssaVibe. @diariesofdiana,” she wrote.

‘The Matrix 4’ will have Keanu Reeves in the leading role. The film was initially slated for a release on April 1, 2022 but will now debut a year earlier -- December 22, 2021. Some lesser-known facts about Keanu Reeves

Meanwhile, Priyanka Chopra will also be seen in Netflix movie ‘The White Tiger’. Helmed by Ramin Bahrani of ‘Fahrenheit 451’ and ‘99 Homes’ fame, is an adaptation of the 2008 Aravind Adiga’s novel of the same name. The film also stars Rajkummar Rao and marks the debut of newcomer Adarsh Gourav.

'Nick is diabetic, I am asthmatic', says Priyanka Chopra on keeping safe during quarantine

What's it going to be for James Bond film, OTT or theatrical release? Read details here