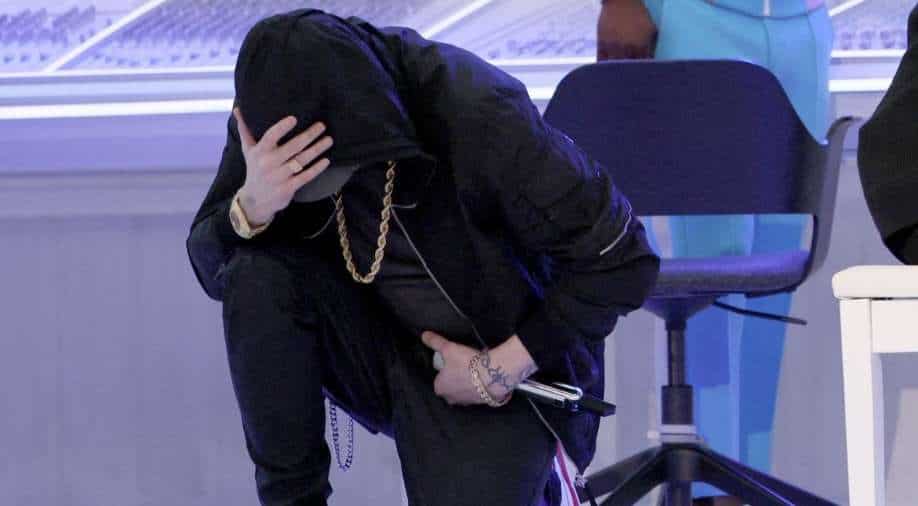 The Grammy-winning artist was part of a starry lineup scheduled to perform at the halftime show at the Super Bowl 2022 on Sunday.

Rapper Eminem knows how to take a stand, and if need be, go down on his knees for it. The Grammy-winning artist was part of a starry lineup scheduled to perform at the halftime show at the Super Bowl 2022 on Sunday.

Snoop Dogg, Dr Dre, Mary J Blige and 50 Cent were some of the performers for the show but it was Eminem who grabbed most of the attention.

The rapper performed his Grammy and Oscar-winning track ''Lose Yourself'' to a packed SoFi Stadium and at the end of the performance, kneeled down and placed his head in his hand - a gesture that former quarterback Colin Kaepernick made during the National Anthem at NFL games as a call for racial justice.

For those unversed, Colin Kaepernick  began kneeling during national anthems in 2016 to protest against police brutality and racial violence against Black Americans

Over the years other athletes too joined him, although he was ostracized by the league.

Reports suggested that Eminem was barred from kneeling by NFL during the rehearsals. There has been no official word from Eminem or NFL about Sunday's kneeling but the act got the internet buzzing with many hailing Eminem for taking a stand on the matter.

Eminem the GOAT for kneeling even after the NFL told him not to do it pic.twitter.com/b64NL2Rz63

Eminem is the man. Great to see him take the knee after his performance.👏👏 #SuperBowl #PepsiHalftime pic.twitter.com/fqmsag66Fc

Eminem kneels after NFL asked him not to. Don't tell a goat how to behave#SuperBowl pic.twitter.com/AYSnXknk2J

For the record, I think I know why Eminem was kneeling, but if it’s related to Colin Kaepernick, he should say that. Not a criticism. But would be a powerful addition to the conversation.

That's not all, NFL reported edited lyrics of performers which talked about police brutality.

During Kendrick Lamar’s performance of “Alright,” lyrics referencing police brutality — “We hate po-po / Wanna kill us dead in the street for sure” — were reportedly omitted. NFL also allegedly asked Dr Dre to remove the lyric “still not loving police” from the song 'Still D.R.E,' the final performed in the show.