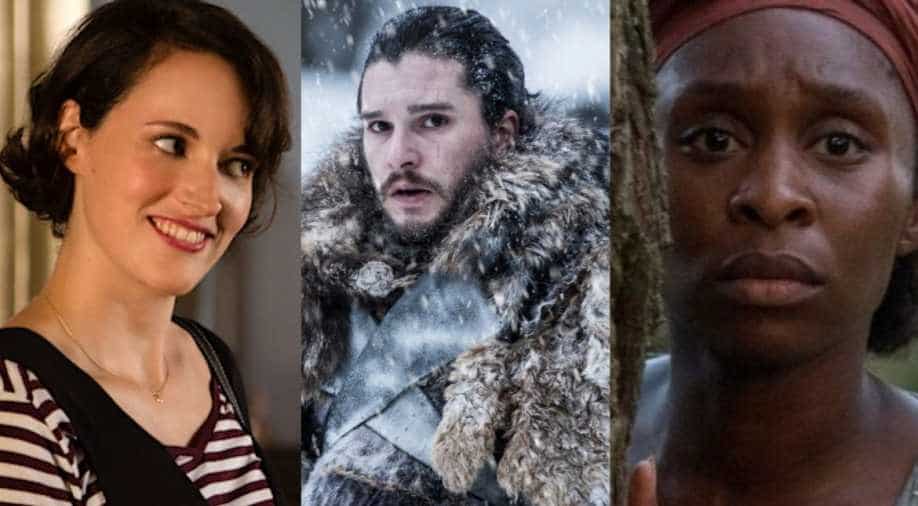 Apart from the many obvious faces that are leading the Golden Globes 2020 nominations list, there are some celebs who have made it for the first time.

Apart from the many obvious faces that are leading the Golden Globes 2020 nominations list, there are some celebs who have made it for the first time. The 77th Golden Globes will take place on January 5 at the Beverly Hilton hotel as Brad Pitt, Leonardo Dicaprio, Jennifer Aniston among many other actors will be part of the event as presenters.

The event will be hosted by Ricky Gervais who will take up the role for a record fifth time.

Golden Globes 2020 will, however, be interesting to catch hold of because of the first-time nominees. Check out the list here:

Ana de Armas
The actress is up for her role as Marta, a caretaker at the center of a murder mystery ‘Knives Out’. She has been nominated for Best Performance by an Actress in a Movie- Musical/Comedy.

@Ana_d_Armas is a tour de force and cozier than Ransom will ever be. pic.twitter.com/Wv7wLlEj3N

Ana will next be seen as the Bond girl in ‘No Time To Die’ that is due in April. She will also be seen as Marilyn Monroe in Netflix movie ‘Blonde’.

This amazing woman’s name is Zhao Shuzhen, but I call her Teacher Zhao. Her performance in @thefarewell is beyond incredible, and working with her was a privilege and an honor. Our movie is out today, and go see it for our incredible ensemble, helmed by the GOAT @thumbelulu 🙏❤️ pic.twitter.com/jvEKNPdjtM

Awkwafina will next be seen in TV series ‘Awkwafina Is Nora From Queens’ that will debut in January 22. Apart from this, she has given her voice in ‘The SpongeBob Movie: Sponge on the Run’ and Disney’s ‘Raya and the Last Dragon’.

Cynthia Erivo
The actress is nominated for her role as Harriet Tubman in ‘Harriet’. She is up for Best Performance by an Actress in a Movie- Drama and Best Original Song for a Movie for penning and singing ‘Stand Up’ from ‘Harriet’.

Cynthia will be seen as Aretha Franklin on the new season of the anthology series ‘Genius’ in May. She’ll also appear in the HBO limited series adaptation of Stephen King’s ‘The Outsider’ that will start from January 12.

Phoebe Waller-Bridge
She is up for her role in ‘Fleabag’ in which she acts as the eponymous, sexually voracious woman who courts a Catholic priest. She has been nominated in the category Best Performance by an Actress in a Television Series- Musical/Comedy. She is also nominated as a producer on the series ‘Fleabag’ and the TV drama series ‘Killing Eve’.

Phoebe co-wrote the upcoming James Bond film ‘No Time To Die’ and she is set to produce and star in HBO comedy-thriller, ‘Run’.

Taron Egerton
How could he miss out on his portrayal of pop-rock icon Elton John in ‘Rocketman’? The actor is nominated for Best Performance by an Actor in a Movie- Musical/Comedy.

The first track from @rocketmanmovie is out now and it’s my version of ‘Rocketman’ produced by @mashupmartin. We didn’t write it but we know the blokes who did. You can preorder it now. Mega proud. X https://t.co/McL8KyQW2T pic.twitter.com/XPkAQXSCeQ

Taron will reprise his animated role as a gorilla in ‘Sing 2’ that is scheduled for 2021.

Kit Harington
The man who finally gets the Iron Throne but doesn’t sit on it, unfortunately, had to bag a TV nomination, right? Kit played the honorable Jon Snow in HBO’s ‘Game of Thrones’ and he is nominated for Best Performance by an Actor in a Television Series- Drama.

For the North!
Congratulations to Kit Harington on his “Best Actor - Drama” nomination at this year’s #GoldenGlobes pic.twitter.com/9Ut4FqeMM9

Kit will next be seen in Marvel movie ‘The Eternals’ as the obscure superhero Dane Whitman/the Black Knight.

Paul Rudd
The actor earned his first Golden Globe nod for his role as the copywriter Miles Elliot in Netflix’s ‘Living With Yourself’. He has been nominated for Best Performance by an Actor in a Television Series- Musical/Comedy.

"As soon as [Paul Rudd] shows up onscreen, you’re on his side, and when there winds up being two of him, you’re on both of his sides. The fact that it’s so easy to distinguish between the two iterations of Miles is a testament to how good Rudd is here." - @vulture

Paul will next be seen playing the role of a teacher Mr Grooberson in ‘Ghostbusters: Afterlife’ that is slated for July.

Also read: The most iconic moments from the awards gala