Golden Globes: The most iconic moments from the awards gala 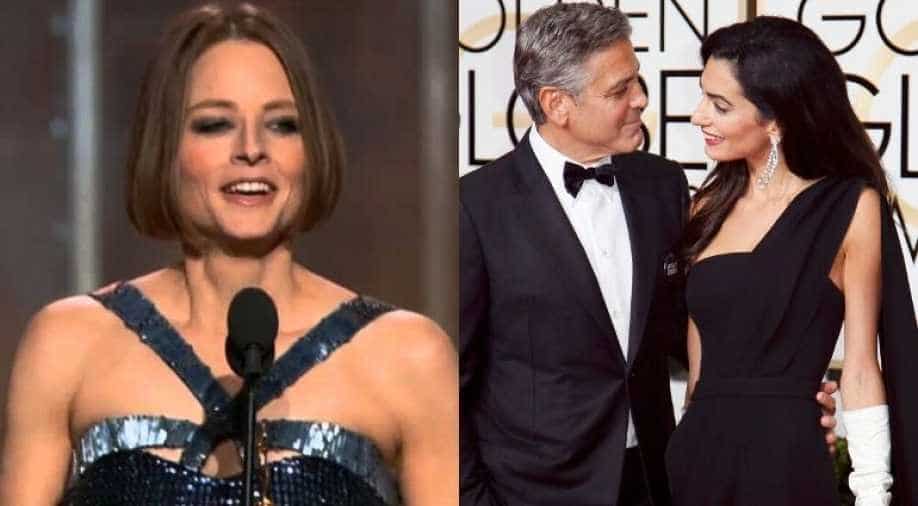 Awards season is upon us as Hollywood's A-listers hit the red carpet Sunday for the Golden Globes 2020, where the champagne flows freely and anything can happen as presenters and winners let down their guard. Let's relive some jaw-dropping instances we have witnessed over the years at the Golden Globes.

Awards season is upon us as Hollywood's A-listers hit the red carpet Sunday for the Golden Globes 2020, where the champagne flows freely and anything can happen as presenters and winners let down their guard. The golden globes has always been known as the boisterous, more informal version of the Academy Awards.  And over the years, we have seen a seemingly endless number of candid moments at the event. So let's relive some jaw-dropping instances we have witnessed over the years at the Golden Globes.

In 2015, Golden Globe hosts Tina Fey and Amy Poehler poked fun at George Clooney as the newly-married star attended the gala with his wife Amal. "Amal is a human rights lawyer who worked on the Enron case, was an adviser to Kofi Annan regarding Syria, and was selected for a three-person UN commission investigating rules of war violations in the Gaza Strip," Fey said. "So tonight... her husband is getting a lifetime achievement award."

Clooney himself paid tribute to his wife in his speech, saying "I couldn't be more proud to be your husband."

Just months after the allegations against Harvey Weinstein sparked a reckoning in Hollywood about sexual misconduct, daytime television trailblazer Oprah Winfrey delivered a stirring speech at the Globes in January 2018, declaring a "new day" for women and girls facing down abusive men. Also see: Meet the Best Actress Drama nominees

"For too long, women have not been heard or believed if they dare speak the truth to the power of those men," Winfrey said to a standing ovation and even some tears as she accepted a lifetime achievement award. "But their time is up! Their time is up!"

Who needs footwear to present an award? Certainly not Emma Thompson, who sauntered up to the podium, her Christian Louboutins and a stiff martini in hand, to present the Globe for best screenplay in 2014. After paying lip service to the craft of script-writing, the two-time Oscar winner launched into a one-woman campaign against the cruelty of high heels.

"I just want you to know, this red, it's my blood," she said, gesturing to her crimson-soled heels before lobbing the offending footwear over her shoulder.


Jodie Foster comes out... sort of

This Golden moment had nothing to do with bad or even cheeky behaviour -- actress and director Jodie Foster's moving soliloquy in 2013 remains a highlight.

At the time, the notoriously private Foster was still in what Out magazine witheringly called a "glass closet" -- hiding deliberately in plain sight -- as she prepared to accept a lifetime achievement award.

It sounded like she was finally going to put the issue of her sexuality to rest when she spluttered: "I guess I have a sudden urge to say something that I've never really been able to air in public... But I'm just going to put it out there, right? Loud and proud, right? So I'm going to need your support on this."

In the end, she stopped short, merely declaring, "I am single. Yes I am. I am single," to laughter and applause, before offering a sweet tribute to former long-time partner Cydney Bernard.

It's one thing to behave badly at a party, but it's a worse offense to spoil everyone's fun by canceling the event in its entirety.
The Hollywood Foreign Press Association shelved the Golden Globes during the Writers Guild of America strike in 2008 after the Screen Actors Guild said its members wouldn't cross picket lines outside the ceremony. Also see: The full list of Best Actor nominees

With the threat of an empty red carpet, the awards were replaced with a dull televised press conference announcing the winners.

Actress Angelina Jolie literally made a splash after her 1999 Golden Globe win, jumping into the pool at the Beverly Hilton, where the gala takes place each year -- and pulling a journalist in with her.

The actress had said before the ceremony that she planned to take the plunge if she won and stuck to her word.
She took home the trophy for her work in "Gia," an HBO biopic about model Gia Carangi, who tumbled into drug addiction and died of AIDS-related complications at age 26. Also see: Golden Globes prediction- who will take home the best actor award in musical or comedy category

Trust jack nicholson to do something out of the ordinary. The veteran actor appeared genuinely surprised after winning the 'Best Actor in a Drama' award for his role in 'About Schmidt' in 2003.The actor then went on to poke fun at his costars, before finally admitting he had taken some valium that evening.

Actress Renee Zellweger was nowhere to be found after Hugh Grant announced her as the winner for Best Actress in a musical or comedy for 'Nurse Betty' at the 2001 Golden Globes.


It was only after grant started accepting the honour on her behalf that the actress finally rushed onto the stage and admitted she had been in the bathroom when her name was called.