Bengali actress and TMC MP Nusrat Jahan married Nikhil Jain in Turkey earlier this year. While Nusrat is a Muslim, she is married to a Jain and hence celebrated the festival with great enthusiasm. The newlyweds later took to Instagram to share photos of their celebrations. 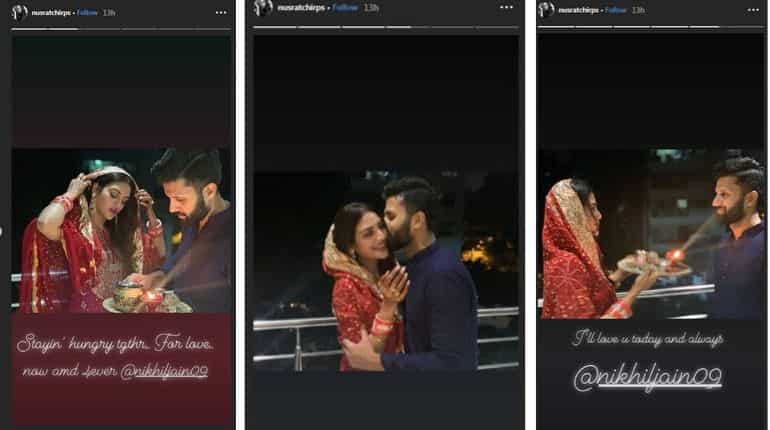 Anushka Sharma too shared photo with husband, Indian cricket captain Virat Kohli. The two fasted together and coordinated outfits in red and black for the occasion.

Kohli took to Twitter and posted a picture with Anushka captioned: "The ones who fast together laugh together. Happy karvachauth."

The ones who fast together laugh together ❤️😃. Happy karvachauth 😇

Anushka also posted a similar image on her Instagram and wrote: "My partner for lifetime and beyond and my fasting partner for the day. Happy karvachauth to all".

Several B-town beauties were at Anil Kapoor`s residence as his wife Sunita Kapoor hosted the Karva Chauth celebrations. Shilpa Shetty, Raveena Tandon, Neelam Soni and Maheep Kapoor were some of the celebrities who were spotted at Kapoor residence on Thursday evening.

While Shilpa looked gorgeous in a bright red saree, Raveena opted for an embellished Anarkali suit. Later after the puja, Shilpa was seen touching her Husband Raj Kundra`s feet, as he totally enjoyed the moment.

No marriage is perfect...It is a union of two imperfect souls who with a little thoughtfulnes , patience and love ..add a lot of life to the number of years ,they live as partners 💕💕💐💐 ❤️🧿❤️Thankyou @rajkundra9 for fasting with me every year.. our 10th year.. Falling more in love with you . Ahem ! Hubby loves the last pic 😅🙌🏼😂Don’t miss the smile.. Enjoy the feet touching once in a Red Moon .😜Ha ha ha #karvachauth #husband #bestfriend #longlife #rituals #gratitude #love #unconditionallove #partner #hubby

Karva Chauth puja .. with the KC gang . Thankyou @kapoor.sunita for getting us together and being the bestest hostess always . #love #gratitude #love #longlife #karvachauth #rituals #traditon #customary

Actor Ayushmann Khurrana fasted for his wife Tahira Kashyap for the second time on Karva Chauth. He took to Instagram stories and wrote: "Shooting and fasting." Tahira, who was in Dubai did a WhatsApp chat during the moon sighting.

Embarrassing you further @ayushmannk Our #karvachauth moment! While I am in Dubai for an event, my certainly better half keeps a fast for me on his set! (p.s I am still popping some pills so couldn’t fast) But how adorable are you Mr A ! Love you so much❤️ #fastinghusbands thank you @shrutiv11 for capturing this moment!

At the Bachchan residence, Aishwarya, Jaya and Shweta hosted a their friends including actress Sonali Bendre as the ladies celebrated the festival together.

A post shared by AishwaryaRaiBachchan (@aishwaryaraibachchan_arb) on Oct 17, 2019 at 9:28pm PDT