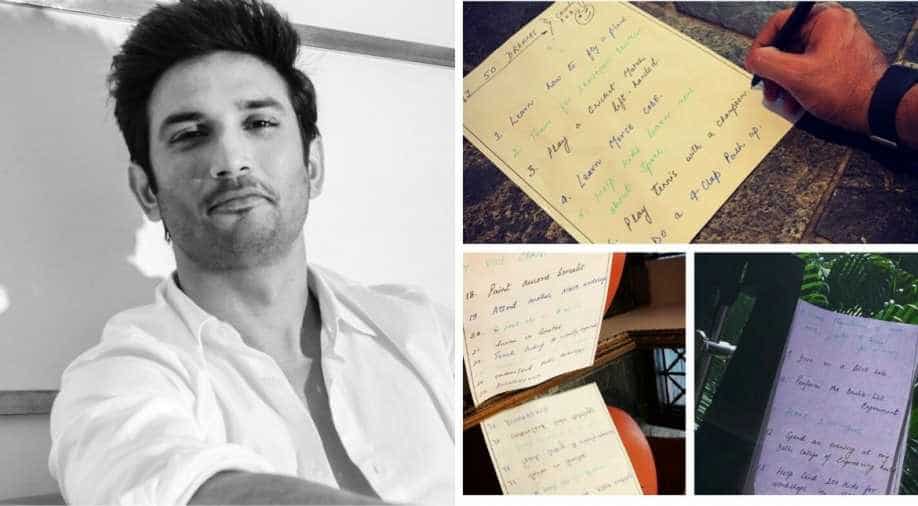 On Sushant Singh Rajput's first death anniversary, here is taking a look at his 50 dreams.

Sushant Singh Rajput, who breathed his last (June 14) last year, was not your regular Bollywood star. The actor was who had ranked seventh in Delhi College of Engineering Entrance Examination in 2003, was deeply fascinated by science and had made a bucket list of 50 things he wanted to do in his lifetime. People close to him termed him as a dreamer who always worked hard to fulfil his dreams.

On the actor's first death anniversary, let's take a look at his 50 dreams.

In pics: From Flight simulator to land on Moon: Extravagant things that Sushant Singh Rajput owned

The 'Chhichhore' actor had listed 50 dreams that he wanted to fulfill in his life in September 2019. The list is going viral now. Rajput had shared a series of handwritten notes of his 50 dreams.

The heartbreaking end of a dreamer: the 50 dreams of #SushantSinghRajput pic.twitter.com/VPgR8Tr0qJ

From learning to fly a plane, playing tennis with a champion, planting 1000 trees, his unique travel desires also included a trip to Antarctica and traveling across Europe by train.

Sushant had a massive interest in space, astronomy and science. The actor aspired to sen 100 kids for NASA workshop, and learn ‘Polynesian Astronomy’, and also explore ‘Andromeda’ with a telescope. He also wanted to work on artificial intelligence.

Sushant also wanted to help train women in self-defence, learn yoga, teach children how to dance,  and own a Lamborghini.

The charming actor gave us some of memorable films like 'M.S.Dhoni: The Untold Story', 'Kai Po Che', 'Kedarnath', 'Chhichhore' and many more.