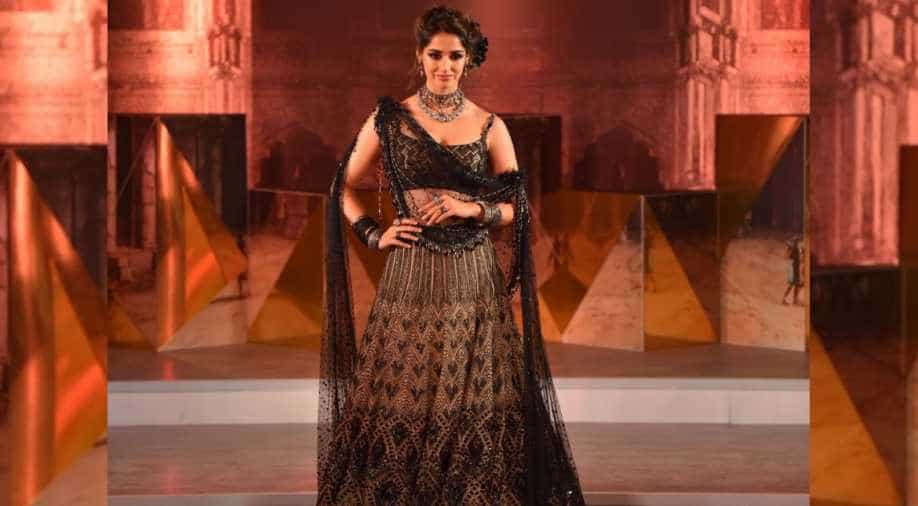 Disha Patani walked as a showstopper for Tarun Tahiliani at a fashion event in Gurugram. Photograph:( WION Web Team )

Walking as the showstopper for designer Tarun Tahiliani, actress Disha Patani spoke to WION on her understanding of fashion, her preparation for the mega-project ‘Bharat’ with Salman Khan, what it was like shooting with the superstar, why she doesn’t mind being called ‘sexy’, and much more.

Bollywood actress Disha Patani recently walked as the showstopper for ace designer Tarun Tahiliani on December 7 at the Delhi-NCR edition of the Blenders Pride Fashion Tour 2018. The annually-held fashion tour offered a visual spectacle of 'beauty and pride' merged in designs that were made to come alive on clothes by Tarun; who, in his words, created the ultimate "India Modern experience" with a fashionable blend of east and west.

Happy to be a part of the show, Disha Patani spoke to WION on her understanding of fashion, preparations for the mega project 'Bharat' with Salman Khan, and why she doesn’t mind being called "sexy".

On her stint as showstopper of the night, the actress said, “Tarun is one of the best designers in our country and I have always looked up to him; in terms of his designs, creation and I am very happy to be walking for him. This year’s concept is ‘My Blend, My Pride’. Pride for everyone is different; it means different things for different people. For me, it’s that positive sense of self-achievement and my journey. I am very proud of it.”

Dressed in the simplest of the clothes at her hotel room in track pants and a pullover jacket as she got ready for the big night with her makeup crew setting in mascara and faux lashes while we sat chatting; Disha looked at ease and not once shy of her laidback style statement. On what fashion means to her, she said, “I am always in comfort clothes and I like to be comfortable in whatever I’m wearing. I don’t know anything about fashion. I like to be comfortable in my own space.”

Do you identify yourself as a fashion-conscious person? ‘Baaghi 2’ actress quickly responded with a “no, not at all.”

Disha is a few films old in the Hindi film industry and is already a popular name with some good films in her kitty including Salman Khan’s ‘Bharat’ that boasts of an ensemble cast and was also in news for its lead actress walking out of the film after shooting for some portions. Priyanka Chopra who was signed to star opposite Salman in the film backed out, with Katrina Kaif replacing her at the last minute.

On her role as a trapeze artist in the film, who is expected to be flexible and do a lot of physical work; Disha pointed out that she is “learning gymnastics” and added, “I’m not great at it but I’m still doing a little bit of what I can do.” She also regularly does “martial arts, dance, gym.”

She said, “This is my day-to-day life. Honestly, preps that I did for ‘Bharat,’ I do it every day. That was the reason they chose me because I could do all that stuff as a trapeze artist.”

While her previous film with rumoured boyfriend Tiger Shroff was an out-and-out action film, the audience didn’t see her indulge in action scenes herself. We could, however, possibly see some in ‘Bharat’? To this, Disha smiled and replied, “Ya, you’ll see some.”

This will be Disha’s first assignment with Salman Khan and she was very excited to share her experience as she said, “It was amazing. It’s a different experience. I’m so fortunate that I’m working with such great actors, directors, producers.”

She added, “He is very experienced, of course. He’s a really nice person in general. He really helped me out throughout the time when we were shooting. He’s patient and supportive.”

While Disha is busy with ‘Bharat’ that is expected to release on Eid 2019, other younger actresses like Janhvi Kapoor and Sara Ali Khan (who happened to make her debut with ‘Kedarnath’ on the same date) have got big-ticket debut films. When asked if she feels there is stiff competition between the younger crop of actresses, Disha said, “There’s no competition, there’s enough films for everybody. I am a feminist. I want to empower other girls, women. I am more than happy that Sara’s film got released and she’s getting amazing review. She’s a beautiful actress. Janhvi is a beautiful actress. I want everybody to do well.”

She added, “We all are in a different league. We all are different from each other -- all are special. We should be happy for each other. So just go and do your things well, especially in this man-oriented world. We should always support each other.”

The actress also doesn’t mind social media trolling as she feels it’s “not real life.” When asked about the massive trolling she got for posing for a sports wear brand during the time of Diwali in a lehenga and sports bra, she said, “It’s just social media. I don’t meet those people. They haven’t seen me in real life; I haven’t seen them in real life. There might be fake accounts that we may not know about.”

As the conversation drew towards trolling and her social media profile, it was pertinent to ask how she felt being addressed as “sexy” by many of her followers. Disha laughed and replied, “I don’t think I am sexy for myself but if people think I am sexy, then thank you guys!”

She added as a matter-of-fact “every girl wants to be sexy or beautiful. Why should I be disgusted to feel sexy? Every girl has the right to feel sexy. What’s wrong in that?”

By this time she was almost done with her makeup and had to change into designer clothes. As we wrapped up the interview, the actress, like all other times before, said that she is “happily single,” discounting all those rumours suggesting that she is dating 'good friend' Tiger Shroff.

Meanwhile, Disha also revealed that she has another project in the pipeline apart from 'Bharat', hinting that it will be announced sometime next month.