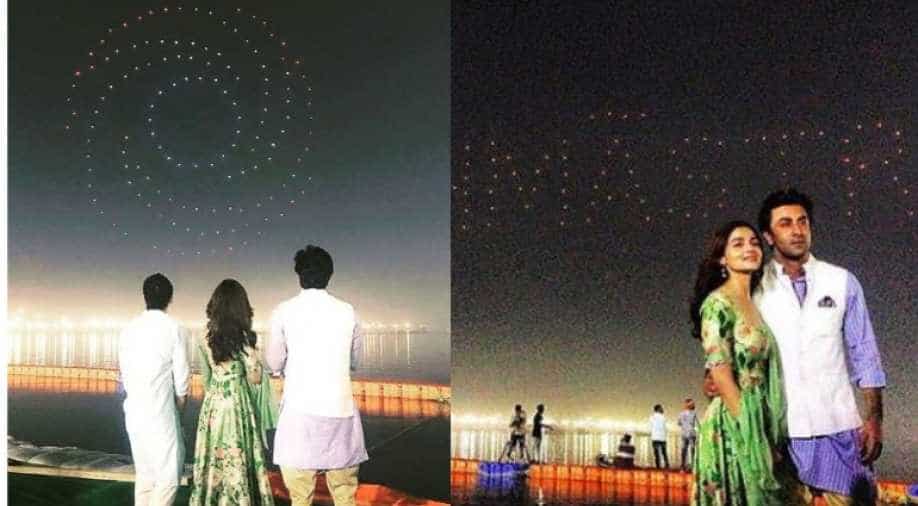 As many as 150 drones were used to light up the night sky to form the logo of the film giving the crowd a one of a kind experience at the Kumbh Mela.

One of the most anticipated films of the years, 'Brahmastra, has been in the making for quite some time. The futuristic sci-fi film stars Bollywood's current favourite couple Ranbir Kapoor and Alia Bhatt along with Amitabh Bachchan and Mouni Roy. Directed by Ayan Mukerji, the film has been backed by Karan Johar.

Some of the most prominent names of Bollywood have come together for the project, so its almost natural that the film's first publicity would be planned in a great way. On Monday, the film's lead pair and director went to Kumbh Mela, Prayagraj to launch the film's logo in a very unique event.

After sending out cryptic tweets the entire day, Alia Bhatt took to Instagram to declare that the team would be revealing the logo of the film at the closing ceremony of the Kumbh Mela.

It's about to begin, look 'up' and you'll be ready to witness magic! Tune into our Facebook page to see it LIVE from the #Kumbh2019!✨ #Brahmastra @amitabhbachchan #RanbirKapoor @aliaabhatt #Nagarjuna @boy_dreaming @karanjohar @apoorva1972 #NamitMalhotra @FoxStarHindi @BrahmastraFilm . . . . . . . #ranbir #alia #aliabhatt #dharmamovies #fantasy #adventure #bollywood

#AyanMukerji aka @boy_dreaming is ready to unravel the world of #Brahmastra for you all at the #Kumbh2019! Head over to our Facebook page to watch the magic LIVE! (Link in bio)✨😀 . . . . . #ayan #ranbirkapoor #aliabhatt #alia #bollywood #dharmamovies #fantady #logo #newfilm #kumbhmela

As many as 150 drones were used to light up the night sky to form the logo of the film giving the crowd a one of a kind experience at the Kumbh Mela.
Alia, Ranbir and Ayan were then seen enjoying the drone show as the crowd cheered on loudly.

The film's plot has been closely guarded but what we know is that the film is going to be the first part of a trilogy.

Interestingly, the film's director, Ayan Mukerji made his debut on Instagram just before the launch, and his first post was a colorful sketch referring to the film.

Part 1: Love #brahmastra (P.S.: going to take some getting used to this new Instagram life)

This will be Ranbir's first release after the hugely successful 'Sanju'. Alia was last seen in 'Gully Boy'. 'Brahmastra' will release during Christmas this year.