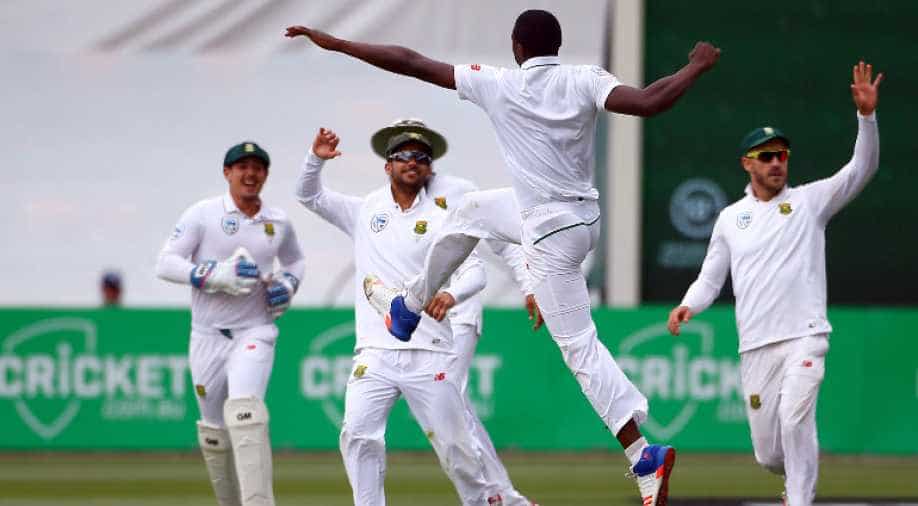 Australia were routed for 85 in the first innings, while the South Africans replied with 326. Photograph:( Reuters )

South Africa's pacemen tore through Australia's last eight wickets before lunch on day four to complete an humiliating innings and 80-run defeat in Hobart on Tuesday and seal the three-match series with a game to spare.

Australia had resumed their second innings on 121-2, with hope of saving the match on an overcast day at Bellerive Oval, but their batsmen crumbled to 161 all out in the face of quality seam bowling.

Resurgent South Africa won the series-opener in Perth by 177 runs and will head into their first day-night test match in Adelaide next week confident they can sweep their demoralised opponents.

It was their third straight test series win in Australia after their 2008 and 2012 successes.

Australia, meanwhile, face another bout of soul-searching, having slipped to a fifth consecutive test defeat after losing their first match of the home summer in 28 years in Perth.

"For us it was just about trying to fight and spend some time out in the middle," said Australia captain Steve Smith, who was caught behind off Kagiso Rabada for 31.

"It wasn’t the way we planned it, credit to South Africa I thought they bowled beautifully again this morning."

Man of the Match Kyle Abbott, the replacement for injured spearhead Dale Steyn, finished with 6-77, capturing four wickets in the morning session and triggering a stunning collapse that followed the home side's 85 in the first innings.

Rising talent Rabada completed the rout with 4-34, following on from his five-wicket haul at the WACA.

"I'm so happy for Kyle ... every single time he gets an opportunity he puts his hand up."

A number of Australia's batsmen were culpable in their dismissals, however.

Abbott, who sent back openers Joe Burns and David Warner on day three, coaxed Usman Khawaja into chasing a wider delivery and the top order batsman nicked it to wicketkeeper Quinton de Kock for 64.

That ended a 50-run partnership with Smith and brought Adam Voges to the crease on a pair of ducks for an innings that many thought would save or end his test career.

Voges was out for two, completely misjudging the same bowler and nicking to the slips with an ugly, aborted pull-shot.

Abbott returned to have Mitchell Starc caught behind for a duck and wrapped up the innings when Nathan Lyon (4) spooned a simple catch to Vernon Philander at mid-on.