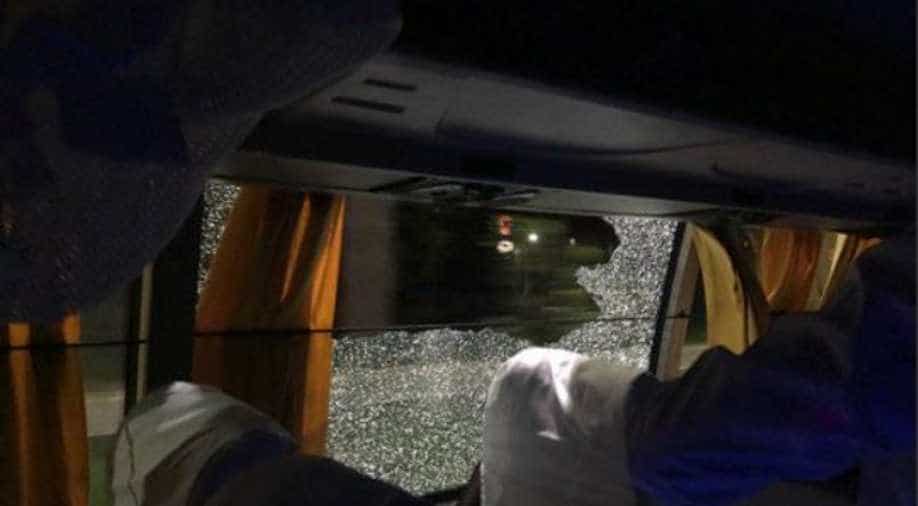 The rock was 'believed to be roughly the size of a cricket ball', the Australian cricket board said. Photograph:( Twitter )

The Australia cricket team suffered a scare following their Twenty20 international win over India in Guwahati ||A rock was thrown at their team bus, shattering one of the windows ||India's Sports Minister Rajyavardhan Rathore reassured the Australian team that tight security arrangements in place

Two people have been taken into police custody following the stone-throwing incident on the Australian cricket team after their Twenty20 international win over India in Guwahati last night.

The arrests come after India's Sports Minister Rajyavardhan Rathore reassured the Australian team that tight security arrangements in place and that personal security of visiting athletes was extremely important for the team. He added that India remained a "graceful host".

Have spoken to @sarbanandsonwal ji about the Guwahati incident. Personal security of visiting athletes & teams is extremely important for us

The Australia cricket team were in for a shock after a  rock "believed to be roughly the size of a cricket ball" was hurled at their team bus on their way back to their hotel.

People of Assam don't approve this. #FIFAU17WC going on in Guwahati. FIFA & all teams expressed their satisfaction at our arrangements.(4/8)

Vow to take strictest action against the culprits. Investigation is on full swing & Police have already picked up 2 suspects. (2/8)

"In a remarkable piece of good fortune, no one was sitting on the seat next to the window when it was broken," governing body Cricket Australia said.

"While no one was injured, the Australian players were understandably shaken up by the incident," the board added.

One of the windows was shattered in the incident, Cricket Australia said, adding that players and the staff were travelling from Busapara Stadium back to their team hotel when the rock pierced the window on the right-hand side of the bus.

The board said the rock was "believed to be roughly the size of a cricket ball" and landed up inside the bus.

Australia's opening batsman Aaron Finch posted a picture of the damaged window pane, writing that it was "pretty scary having a rock thrown on the way back to the hotel."

Pretty scary having a rock thrown through the team bus window on the way back to the hotel!! pic.twitter.com/LBBrksaDXI

Australia's team bus was also struck by a rock in Bangladesh five weeks ago as it travelled back to a hotel following the first day's play of the second and final test against the home side in Chittagong.

That prompted authorities to tighten security around the Australia team.

Australia are scheduled to play India in the third and final Twenty20 of the series in Hyderabad on Friday.