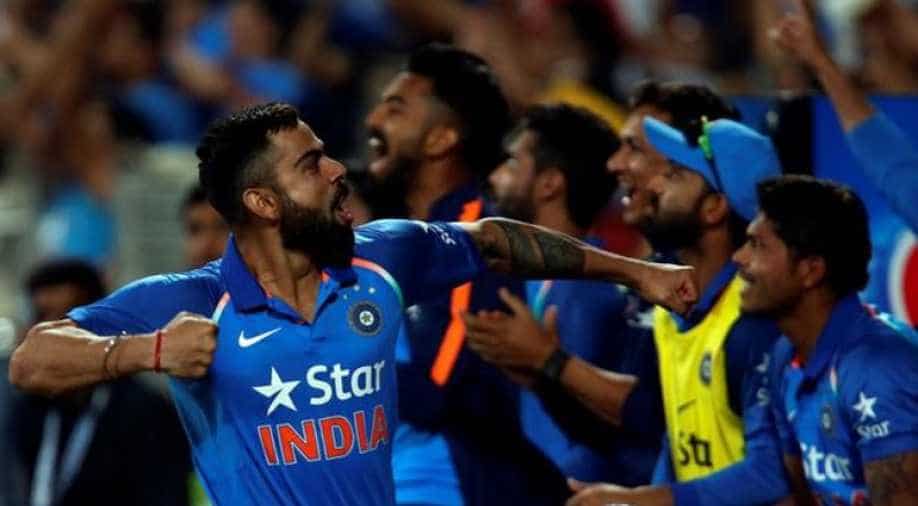 England did surprise captain Virat Kohli and Rahul by using left arm slow bowler Liam Dawson, who had replaced fast bowler Liam Plunkett in the XI in the horses for courses change, to open the bowling with the Tymal Mills. Photograph:( Reuters )

India beat England by 5 runs in the second Twenty20 International to level the three-match series 1-1.

Sent into bat, India scored 144 for eight, and then restricted England to 139 for six in 20 overs.

Young Jasprit Bumrah shone in the death like never before as his excellent final over ensured India sensationally edged out England by five runs in the second Twenty20 International to level the three-match series here tonight.

Needing eight runs off six balls, Bumrah, all of 23, perhaps bowled the over of his life as he restricted England to just two runs and end their innings at 139 for six in pursuit of 145.

The match seemed to be in England's bag when Jos Buttler clobbered veteran Ashish Nehra for 16 runs with two sixes in the penultimate over. However, Bumrah had other ideas, eventually finishing with figures of 2/20 in 4 overs, while his senior colleague Nehra took 3/28.

This was after opener K L Rahul stood out with a breezy 71 on a surface where shot-making was difficult.

Put in to bat, Rahul's knock was the lone bright spot as India could manage a modest score before the bowlers turned the match around on its head.

England made light of the loss of openers Jason Roy and Sam Billings off successive balls in the fourth over bowled by left-arm pacer Nehra and were well on way to pull off the win when they rode on Root's run-a-ball 38 and Ben Stokes' 38 and their fourth wicket partnership of 52 in 41 balls.

Root had been involved in an important third-wicket stand of 43 in 41 balls with his captain Eoin Morgan.

Nehra came back for his second spell and also broke through by dismissing Stokes leg before after the batsman had struck two sixes and two fours in his 33-ball knock and had been bowled off a no-ball by Amit Mishra.

Although Nehra was hit for 16 runs in his final over, Bumrah trapped Root leg before and then clean bowled Buttler in the final over to end the visitors' hopes as Moeen Ali failed to connect the last ball with England needing six runs.

India lost three wickets in the last over, including that of Mahendra Singh Dhoni, to end at 144 for 8. Rahul's 47-ball knock contained two sixes and six fours and his partnership of 56 with fellow Karnataka mate Manish Pandey (30 in 26 balls) was the only notable stand.

Wearing black armbands to mourn the sudden demise of India's under 19 and A team trainer Rajeev Sawant and the father of fast bowler Mohammed Shami who is not part of the squad, the home team batsmen failed to get going in earnest.

England did surprise captain Virat Kohli and Rahul by using left arm slow bowler Liam Dawson, who had replaced fast bowler Liam Plunkett in the XI in the horses for courses change, to open the bowling with the Tymal Mills.

Kohli, in fact, had a charmed life as he top-edged Mills who worked up good pace behind the 'keeper for a four that eluded the left-handed grasp of Sam Billings on the boundary line and then survived a close leg before appeal against Chris Jordan in the next over.

Kohli struck Mills for a six and a four in successive balls in the next over after surviving the leg before appeal but then was deceived by a slower ball from Jordan and holed out to long off for 21.