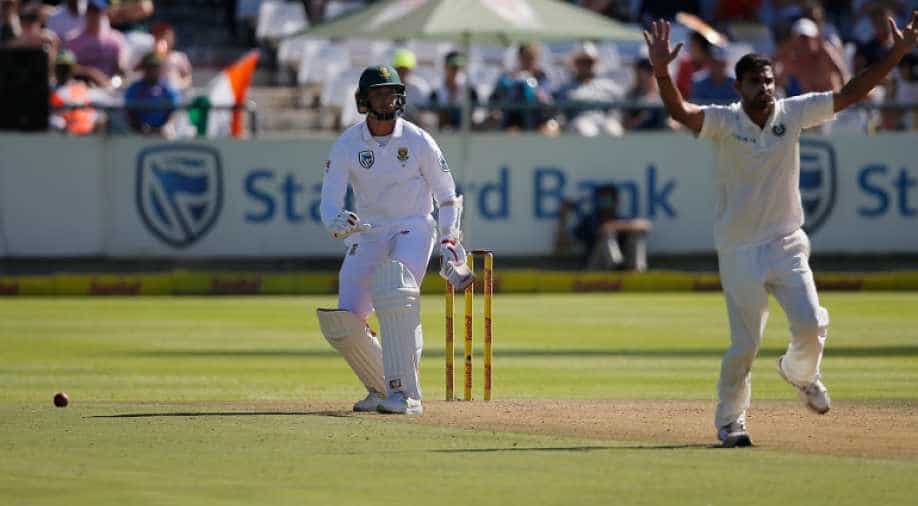 It was a remarkable turnaround after South Africa had been reduced to 12 for three by Bhuvneshwar Kumar inside the first half hour. Photograph:( AFP )

The "genius" of AB de Villiers and a ferocious onslaught from South Africa's fast bowlers changed the course of the first day of the first Test against India at Newlands on Friday.

India started the day like the world champions they are according to the Test rankings, but their nearest challengers finished on top, with India staggering at 28 for three at the close -- losing skipper Virat Kohli for just five -- after bowling out the hosts for 286.

It was a remarkable turnaround after South Africa had been reduced to 12 for three by Bhuvneshwar Kumar inside the first half hour.

"They are a quality bowling attack and at that stage, I was sitting there wondering how we were going to score a run," said South African batting coach Dale Benkenstein.

He didn't have to wonder for long.

Counter-attacking batting, led by aggressive half-centuries by De Villiers and captain Faf du Plessis, and some wayward bowling by India enabled South Africa to make a reasonable total on a lively pitch before the South African fast bowlers struck.

Benkenstein praised "the class and genius of AB de Villiers and the tenacity of the captain".

De Villiers and Du Plessis put on 114 for the fourth wicket, with De Villiers in sparkling form as he hit 65 off 84 balls with 11 fours.

He showed intent from the start of his innings, hitting four fours off Kumar's fifth over.

"That one over from AB changed the game," said Benkenstein. "He made the bowlers worry about their lengths. That partnership got us back in the game and brought belief back in the change room."

Kumar, who took wickets in each of his first three overs, finished with four for 87 and conceded more than four runs an over as did fellow seamers, new cap Jasprit Bumrah and Hardik Pandya.

Only Mohammed Shami was economical, taking one for 47 in 16 overs.

"We gave away 25 or 30 too many runs," said Kumar, who acknowledged the game-changing ability of De Villiers.

"When AB bats you know you have to bowl well. In some overs, we gave away too many boundaries."

Kumar said India would have to bat well on Saturday but said he felt the match was evenly poised.

Benkenstein, though, said South Africa were "very happy" after their four-man pace attack was unleashed for the last 51 minutes of play.

Vernon Philander had Murali Vijay caught at gully and four balls later Dale Steyn, playing his first Test match in more than a year, caught Shikhar Dhawan off his own bowling when Dhawan's attempted pull steepled high into the air.

The biggest prize fell to Morne Morkel, who came on as first change and produced a sharply-lifting delivery which Indian captain Virat Kohli edged to wicketkeeper Quinton de Kock after making just five.

Du Plessis said batting first on a well-grassed pitch was a "tricky decision" and his side's start must have reinforced his misgivings.

Dean Elgar, South Africa's leading batsman during 2017, edged the third ball of the match to be caught behind by Wriddhiman Saha for nought.

His opening partner, Aiden Markram, fell in Kumar's next over, leg before wicket for five, before Hashim Amla, on three, edged an attempted back foot drive and gave Saha a second catch.

Saha finished with five catches behind the stumps.

But the rest of the South African batting proved resilient. The De Villiers-Du Plessis partnership was followed by a sixth wicket stand of 60 off 54 balls from Quinton de Kock and Philander, and there were useful contributions from the tailenders.

"Those runs down the order in tough conditions were vital," said Benkenstein.