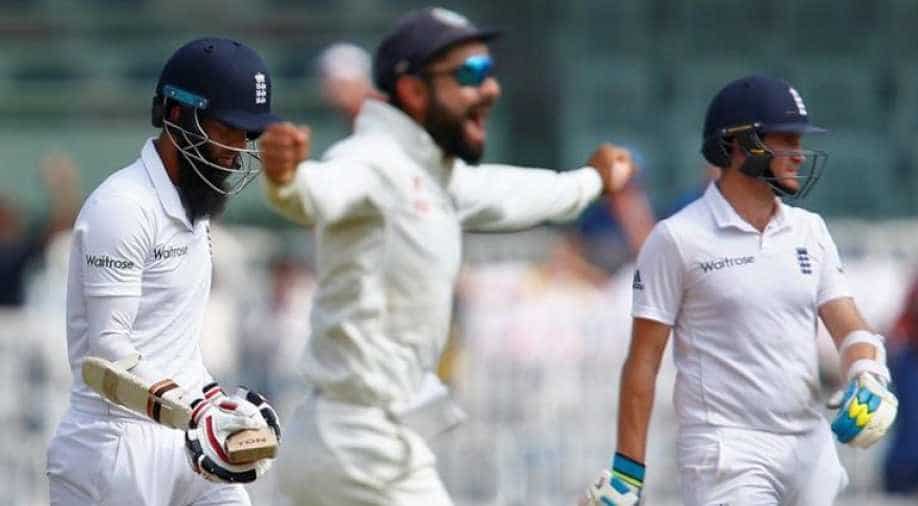 Resuming on 284-4, England got an early jolt with Ravichandran Ashwin striking with the day's fifth delivery at the MA Chidambaram Stadium. Photograph:( Reuters )

Moeen Ali made 146 before his vulnerability against short-pitched bowling was again manifested as India claimed three wickets on the second morning to restrict England to 352 for seven in the fifth and final test on Saturday.

Debutant Liam Dawson was batting on 27 at lunch with Adil Rashid on eight at the other end with the tourists pressing for a pride-salvaging victory in a series they lost with a match to spare.

Resuming on 284-4, England got an early jolt with Ravichandran Ashwin striking with the day's fifth delivery at the MA Chidambaram Stadium.

The leading wicket-taker of the series had endured a rare wicketless day on Friday and Ashwin lured Ben Stokes onto the front foot to edge a fuller delivery which Parthiv Patel collected behind the stumps.

Paceman Ishant Sharma trapped Jos Buttler lbw for five while Moeen, who resumed on 120, looked ill at ease against the short-pitched deliveries which he often fended awkwardly.

The left-hander virtually walked into a trap when Umesh Yadav forced him into playing a pull shot, which the batsman mistimed to find Ravindra Jadeja at deep mid-wicket.

Moeen faced 262 balls, hitting 13 boundaries and a six, before surrendering to what is now a familiar weakness.

Dawson endured a tough test initiation, the second ball he faced from Sharma smacking him on his helmet but the 26-year-old grew confident with time to hit three boundaries, the last of which took England past the 350-mark.