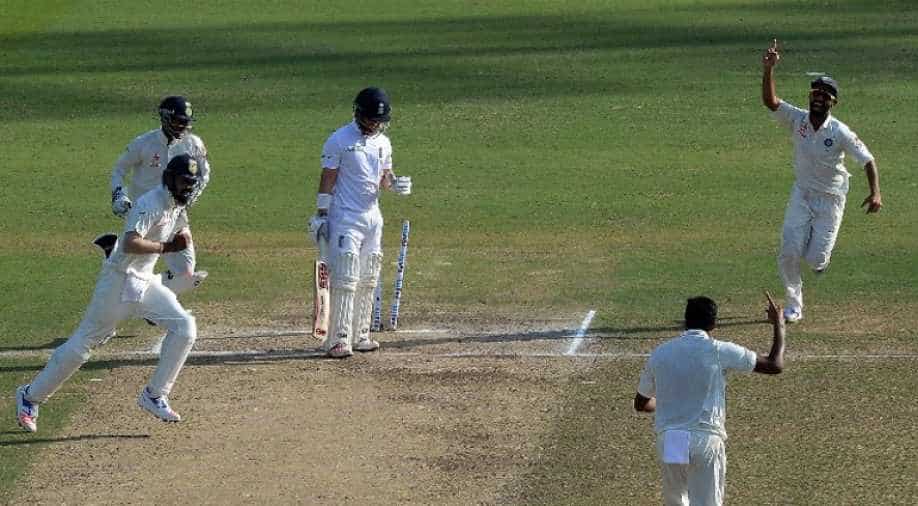 Ravichandran Ashwin on Friday said he has a "psychological advantage" over England after his all-round showing put India on top in the second Test as the visitors struggled against spin on day two in Visakhapatnam on Friday.

England were reeling at 103 for five at stumps in response to India's first innings score of 455. The visitors still trail by 352 runs.

Ashwin, who scored a gritty half-century to propel the Indian score after skipper Virat Kohli's 167, claimed two wickets in the final session to rattle the English top-order.

Currently ranked the world's top Test bowler, Ashwin underlined his prowess with the bat by averaging over 60 when England last toured India in 2012.

"And generally I mean there are attacks where you feel confident out there," Ashwin, who has recorded eight fifties and four hundreds in 41 Tests, told reporters. Ever since England toured here last time, I have been batting well... so that`s a psychological advantage you carry into a game when I play against them," he said.

Shami bowled an inspired first spell with the new ball as he cleaned up Cook for two in the third over of the innings.

Shami`s sensational delivery pitched on a good length before moving in a shade to hit the top of Cook`s off stump and break it in two, leaving England 4-1.

Haseeb Hameed, who impressed on debut with a well-made 82 in the second innings of the Rajkot Test, put on 47 runs with Joe Root (53) in his bid to steady the innings. But Hameed`s resistance did not last long as he was run out for 13 after being sent back while attempting to take a second run.

Off-spinner Ashwin soon took charge to get Ben Duckett clean bowled for five and then got the big wicket of Root, who recorded his 24th Test half-century.

Root tried to counter the Indian spin attack during his 98-ball stay laced with six boundaries, but seemed to run out of patience after giving away a catch to long-off.

However Ashwin was not amused when an Indian scribe asked the bowler about the nature of the wicket at Visakhapatnam, which is hosting its first ever Test."Honestly one day I would like to walk into a press conference and stop answering questions on the pitch because that`s as good as an Indian pitch one can get," said a visibly flustered Ashwin.

"I don`t know why these jibes come back at us.... You guys watch the game through the day and pitch is something you can definitely assess better than we do," he added.

Debutant off-spinner Jayant Yadav joined his senior partner from the other end to get his first Test wicket after trapping Moeen Ali lbw for one as England slipped to 80-5.

Stokes and Bairstow then played cautiously to see off the rest of the day`s play with a 23-run unbeaten stand.

Earlier Ashwin`s fighting 58 came after off-spinner Ali checked the Indian charge with three wickets in the morning session, including that of Kohli, who added just 16 runs to his overnight 151.

Ashwin put on 64 runs for the eighth wicket with Jayant Yadav, who scored 35, guiding India to a respectable first innings score on a pitch that is expected to offer more turn as the match progresses.

Kohli's 226-run third-wicket partnership with Cheteshwar Pujara (119) on the opening day was the highlight of the Indian innings after the hosts elected to bat first.

WATCH: Mohammed Shami hugs Cheteshwar Pujara after dismissing him for a duck in practice game