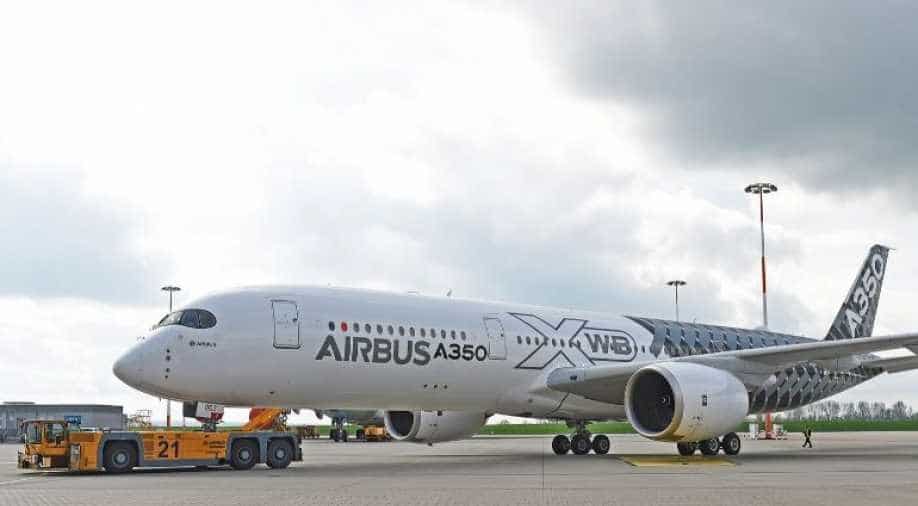 FILE PHOTO: European planemaker Airbus unveiled on Monday the first cabin for its new mid-sized twin-engined airliner, the A350 XWB, vowing to avoid a repeat of the delays caused by cabin design changes on its bigger A380 super jumbo. Photograph:( Reuters )

The World Trade Organization on Monday rejected European Union claims that it no longer provides subsidies to planemaker Airbus, prompting the United States to say it could increase retaliatory tariffs on a wider range of European goods.

A new compliance report from the Geneva trade watchdog found that the Airbus A380 and A350 jetliners continue to be subsidised as a result of past European government loans.

US Trade Representative Robert Lighthizer said the decision affirmed that European subsidies to Airbus continued to harm the US aerospace industry, and strong action was required to eliminate such market-distorting subsidies.

It was the latest salvo in a record transatlantic trade dispute involving mutual claims of illegal aircraft subsidies, which comes to a head at a time of rising global trade tensions and has grabbed the attention of financial markets this year.

The United States was in October awarded the right to impose tariffs on $7.5 billion of annual EU imports in its case against Airbus. It placed partial tariffs on most Airbus jets and products from cheese to olives and single-malt whisky.

A decision on retaliation rights for the EU in a parallel case on aid for Boeing is due next year.

Officials on both sides have expressed support for a negotiated settlement, while accusing the other of failing to take the prospect of a negotiated solution seriously.

In Monday's finding, a three-person panel rejected EU claims that a recent decision by Airbus to stop producing the slow-selling A380 meant the giant airliner could no longer be seen as a threat to Boeing, whose competing 747 is also out of fashion.

While the WTO no longer faulted Airbus for causing lost sales to Boeing with the A380, which is no longer marketed, it ruled that the superjumbo would cause market-share damage to Boeing for as long as it is produced and delivered.

The WTO appeared to strengthen findings against the A350, saying it had both cost sales and damaged Boeing's market-share prospects - a process called impedance - in the busier twin-engined long-haul market where Boeing offers its 787 Dreamliner.

A previous WTO ruling had focused only on lost sales.

The Commission said the new findings contained serious legal errors and that it would consider its next steps, including a possible appeal, while seeking an accord with the United States.

USTR, which imposed tariffs of 10 per cent on large civil EU aircraft and 25 per cent on selected farm and other products in October, said it would look at raising tariff rates and subjecting additional EU products to the tariffs. It gave no immediate details on the size of the possible increases, or which products could be added to the current list.

As so often following the dozens of rulings in the 15-year-old trade case, Airbus and Boeing were left starkly at odds.

Boeing claimed a complete loss for its European rival Airbus, which it said continued to harm the US aerospace industry by receiving billions of euros in illegal aid.

Airbus said the WTO's decision to drop previous references to the A380 causing lost sales to Boeing meant the United States should slash its authorised tariffs by $2 billion to $5.5 billion.

The USTR rejected that argument, saying it saw no basis in the report to justify reducing US retaliatory tariffs.

US sources said only full compliance or a political settlement - which is widely seen as remote amid fragile economic ties - could legally cancel WTO approval for tariffs.

Both sides can appeal the latest finding but doing so could place the WTO in uncertain legal territory, experts said.

The WTO Appellate Body will cease to function after December 10, due to US blocking of new appointments, leaving a tight deadline for a challenge to Monday's ruling.

Appeals launched after that risk falling into a legal void, and it is unclear if the body will be allowed to rule on appeals filed before then.