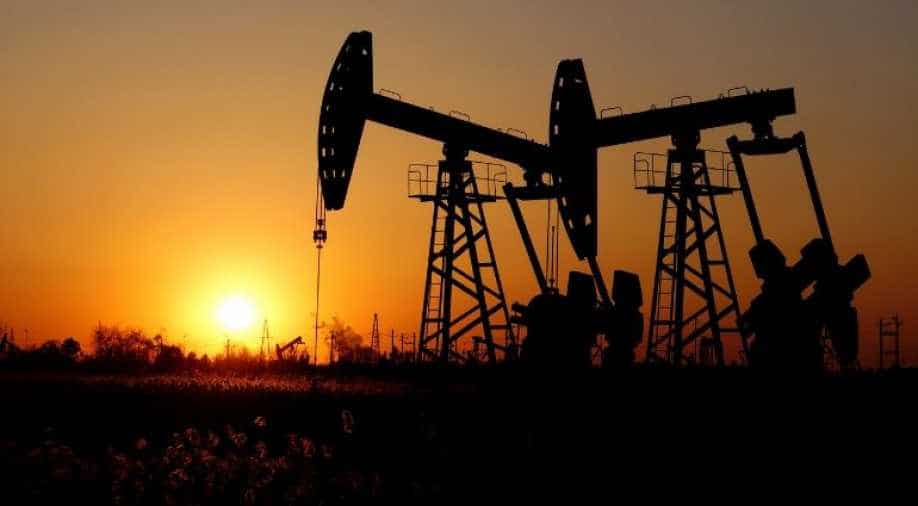 Pumpjacks are seen against the setting sun at the Daqing oil field in Heilongjiang province, China. Photograph:( Reuters )

Oil prices fell on Monday amid worries about an economic slowdown and the US-China trade war, which have led to a cut in the outlook for global oil demand.

US West Texas Intermediate (WTI) futures were at $53.89 per barrel, down 61 cents from their last close.

Both benchmarks fell last week, with Brent losing more than 5% and WTI falling about 2%.

Although the third quarter is fundamentally the strongest season for oil demand because of driving in summer holidays, the trade dispute between the United States and China has weakened demand and reduced crude prices.

US President Donald Trump said on Friday he was not ready to make a deal with China and even called a September round of trade talks into question.

"Despite the laundry list of disruptions and additional barrels at risk, investor length is currently near a multi-year low."

Goldman Sachs Group Inc said on Sunday it no longer expects a trade deal between the world's two largest economies before the 2020 US presidential election.

The International Energy Agency (IEA) said on Friday mounting signs of an economic slowdown had caused global oil demand to grow at its slowest pace since the financial crisis of 2008.

OPEC members continue to cut production to drain global oil inventories, with the Saudis cutting more than their agreed quota, but analysts said more cuts were needed to support prices due to a fall in demand and non-OPEC supply growth next year.

"If OPEC cuts are merely extended through 2020, prices are going to fall further from current levels," Bernstein Energy said in a note on Monday.

"We believe that OPEC needs to cut by a further one million barrels per day in 2020 if they are to defend oil prices at $60 a barrel."

In a sign of lower production in the United States, the weekly US oil rig count, an early indicator of future output, fell for a sixth straight week as producers cut spending on new drilling and completions.

India's imports of crude oil have also stalled in recent months, a fall that tallies with weaker economic growth in the country.