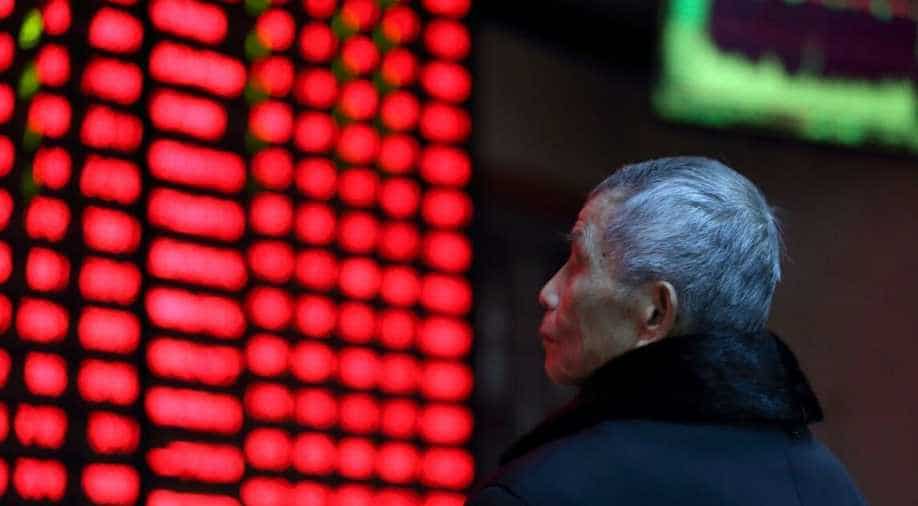 File photo: A man looks on in front of an electronic board showing stock information Photograph:( Reuters )

European shares, including the broader Euro STOXX 600 gained 0.3 per cent in early trade, with indexes in Frankfurt and Paris up by similar amounts

World shares ticked up on Friday, buoyed by comments from US President Donald Trump that talks aimed at dialing down the damaging trade war with China were "moving right along".

Trump's relatively upbeat tone in comments on Thursday was enough to encourage riskier bets by investors, despite a lack of agreement over whether existing tariffs should be dropped as part of an initial deal to ease the long standoff.

European shares, including the broader Euro STOXX 600 gained 0.3 per cent in early trade, with indexes in Frankfurt and Paris up by similar amounts.

The cautiously buoyant mood mirrored an appetite for riskier bets in Asia, where MSCI's broadest index of Asia-Pacific shares outside Japan was up 0.5 per cent.

The MSCI world equity index, which tracks shares in 47 countries, added 0.2 per cent to 554.91 points, not far off a record high of 550.63 hit last January but still on track for a weekly fall.

Investors were hoping the two sides can reach a compromise to at least avoid their worst fear: that the United States goes ahead with its final batch of tariffs on about $156 billion of Chinese exports, due to take effect on December 15.

Trump's remarks came after Chinese officials reiterated demands that some US tariffs be rolled back if the sides are to reach a so-called phase one deal.

Markets had expected the sides to seal the initial deal in November. Instead, investors are nervously watching the approaching deadline for the new US levies.

"The difficulty with this is it's very difficult to time and to trade," said Jeremy Gatto, a multi-asset investment manager at Unigestion. "We are relatively favorable towards riskier assets in general but with hedges."

Gatto said those hedges include currencies such as the US dollar, Japanese yen, and Australian dollar, as well as options.

Investors have already taken precautions against a possible slide in stocks by buying put options, with demand for "put" options to hedge exposure to the S&P500 index climbing in recent days.

In one sign of detente, China said it would waive import tariffs imposed last year on some US soybean and pork shipments. Beijing is rushing to source more meat to fill a gap in protein supplies.

China stocks posted their biggest weekly advance in nearly two months, with the blue-chips up 0.6 per cent.

Investors were looking out for US jobs data, due out at 1330 GMT. The non-farm payrolls report is expected to show 180,000 new jobs were created in November, up from 128,000 a month earlier.

Signs of buoyancy in the labour market would soothe anxiety over the impact of the trade war.

"Markets are in consolidation phase," said Salman Ahmed, chief investment strategist at Lombard Odier. "It's wait and watch for first, how does the non-farm payrolls look and, more importantly, the December 15 tariff deadline."

In other economic data, German industrial output fell unexpectedly in October, pointing to persistent weakness in the backbone of the economy. Berlin said, however, that new orders and business expectations suggest output may stabilise.

While markets have largely priced in the view that the world economy has dodged the bullet of recession, there are still signs of fragility in many major economies.

Oil lost ground as investors awaited a meeting of OPEC and its allies later on Friday, which is expected to formally agree to more output curbs in early 2020.

Details of the agreement and how the cuts will be distributed among producers still need to be ratified at a meeting of OPEC and non-OPEC nations, otherwise known as OPEC+, in Vienna.

Brent crude futures were flat at $63.46 a barrel after earlier gaining ground.

The agreement coincided with the initial public offering of state oil firm Saudi Aramco, which was priced at the top of its range and raised $25.6 billion in the world's biggest IPO.

In currencies, the British pound stepped back some 0.2 per cent. Sterling spiked to a seven-month high of $1.3166 on Thursday on bets that next week's election will give the Conservative party the majority it needs to deliver Brexit, ending near-term uncertainty.

Against a basket of currencies the dollar has dropped every day this week, falling to a one-month low of 97.356 on Thursday. The index was last down a smidgeon at 97.370 and has lost nearly 1 per cent this week.

US sues Facebook for allegedly favouring immigrants over US workers