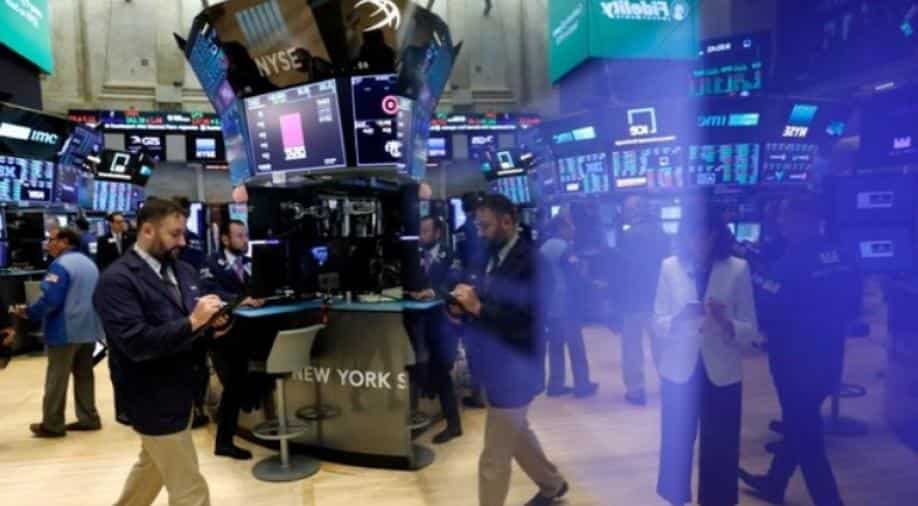 Wall Street looked set to for another jolt lower when it reopens but it was heavy selloffs in both Asia and Europe, which was heading for the fifth day of uninterrupted falls, that did the main damage.

World shares slid towards their lowest level in a year on Tuesday, as negative drivers from fatigued earnings and Saudi Arabia's diplomatic isolation to a brewing spat over Italy's finances piled on the pressure.

Wall Street looked set to for another jolt lower when it reopens but it was heavy selloffs in both Asia and Europe, which was heading for the fifth day of uninterrupted falls, that did the main damage.

The tech sector posted the worst performance after Swiss-listed chipmaker AMS plunged 25 per cent as its outlook triggered alarm bells, but there was a broader force at play.

The pan-European STOXX 600 was near a two-year low with almost half of its stocks now in the bear-market territory -- down 20 per cent from their peak.

"This is quite an important period now because we have tried to rally a few times and haven't really managed it," said Natwest Markets' head of global strategy James McCormick.

There has been a spike in US bond yields similar to earlier in the year, "but the macro picture for equities is more challenging now," he added, pointing to fading synchronization in global growth as well a stronger dollar.

That strength kept the euro pinned near a two-month low at $1.146 before a European Commission meeting that could see Brussels take the unprecedented step of demanding changes to Italy's recently laid out budget plans.

Italian bond traders were biding their time amid reports of some conciliatory moves from Rome's coalition but the spat has also bred doubts about the European Central Bank plans to possibly raise its interest rates next year.

Questions about the future of Britain's prime minister, mired in a stalemate over Brexit, relented just an enough to help sterling claw higher but the mood remained distinctly 'risk off' regardless.

That helped strengthen the safe-haven Japanese yen and Swiss franc while higher-yielding currencies like the Australian and New Zealand dollars fell.

"The prospect of a normalisation of (ECB) monetary policy was the main reason why the euro was able to appreciate over the past year. However, there is a rising risk that this support is now going to crumble," Commerzbank analyst Thu Lan Nguyen said.

US stock index futures were pointing to a more than 1 per cent fall for Wall Streets main markets later. Digger maker Caterpillar's shares fell 5.4 per cent in premarket moves after it blamed US tariffs for rising costs, while 3M slumped 7 per cent after missing analysts estimates.

Markets were also digesting Turkish President Tayyip Erdogan's comments on the killing of Saudi Arabian journalist Jamal Khashoggi at a Saudi consulate in Istanbul this month.

"Intelligence and security institutions have evidence showing the murder was planned... Pinning such a case on some security and intelligence members will not satisfy us or the international community," Erdogan told Turkey's parliament, though he did not reveal a smoking gun in the form of recordings that some reports had hinted at.

Saudi Arabia, a top crude oil exporter, faces international pressure to provide all the facts about an incident that has raised a global storm and added the threat of sanctions against the kingdom to a list of market concerns.

US President Donald Trump said on Monday he was not satisfied with what he had heard from Saudi Arabia about the killing, but expressed reluctance to punish the kingdom economically.

Investors worry that may lead to Saudi retaliation through crude oil, although a Saudi pledge to play a "responsible role" and keep markets supplied held down crude prices on Tuesday.

Asia's overnight tumble gave back some of the ground the region had clawed back over the last two sessions.

MSCI's broadest index of Asian shares dropped 2 per cent to a 1 1/2-year low, with declines in many of the region's heavyweight bourses even more pronounced.

"We've got a few negative factors when market sentiment was already fragile," said Hiroyuki Ueno, senior strategist at Sumitomo Mitsui Trust Asset Management. "And earnings from some Japanese companies were weaker than expected, with some starting to blame trade wars."

The yuan was little changed but stood near Monday's 21-month low of 6.9445 per dollar in the onshore trade on expectations China will pursue looser monetary policy to cope with pressure from US President Donald Trump on tariffs.