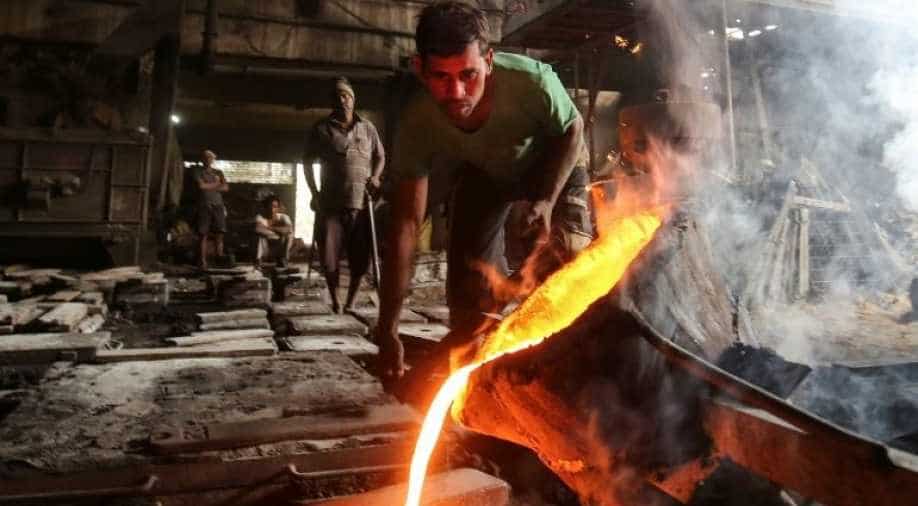 A worker pours molten iron from a ladle to make automobile spare parts inside an iron casting factory in Ahmedabad, India Photograph:( Reuters )

Signs of recovery are welcome news for Asia's third-largest economy, which has a coronavirus recovery rate at a whopping high of 83.53 per cent

India's factory activity expanded at its fastest pace in over eight years in September as a relaxation in coronavirus lockdown restrictions drove a surge in demand and output, a private survey showed on Thursday, though layoffs continued.

Signs of recovery are welcome news for Asia's third-largest economy, which has registered a coronavirus recovery rate at a whopping high of 83.53 per cent.

The Nikkei Manufacturing Purchasing Managers' Index, compiled by IHS Markit, jumped to 56.8 in September from 52.0 in August, above the 50-level separating growth from contraction for a second straight month. It was the highest reading since January 2012.

"The Indian manufacturing industry continued to move in the right direction, with PMI data for September highlighting many positives. Due to loosened COVID-19 restrictions, factories went full steam ahead for production, supported by a surge in new work," noted Pollyanna De Lima, economics associate director at IHS Markit.

"While uncertainty about the COVID-19 pandemic remains, producers can at least for now enjoy the recovery."

A sub-index tracking output hit its highest since December 2007 and new orders expanded at the sharpest pace since February 2012, helped by both domestic and foreign demand which grew for the first time in seven months.

Although input prices increased at a slower rate in September, manufacturers raised their selling prices after having cut them since March to secure sales.

Despite the significant rebound, firms cut staff for the sixth month in a row. Coronavirus-related distortions have already made millions jobless.

The sector is unlikely to get much support from the Reserve Bank of India over the coming months as persistently high inflation is expected to force the RBI to remain on the sidelines.

The RBI early this week postponed a policy committee meeting that was slated for Sept.29-Oct. 1 and said it would be rescheduled. It did not give a reason for the move.

Still, business optimism about the coming 12 months hit its highest since August 2016.