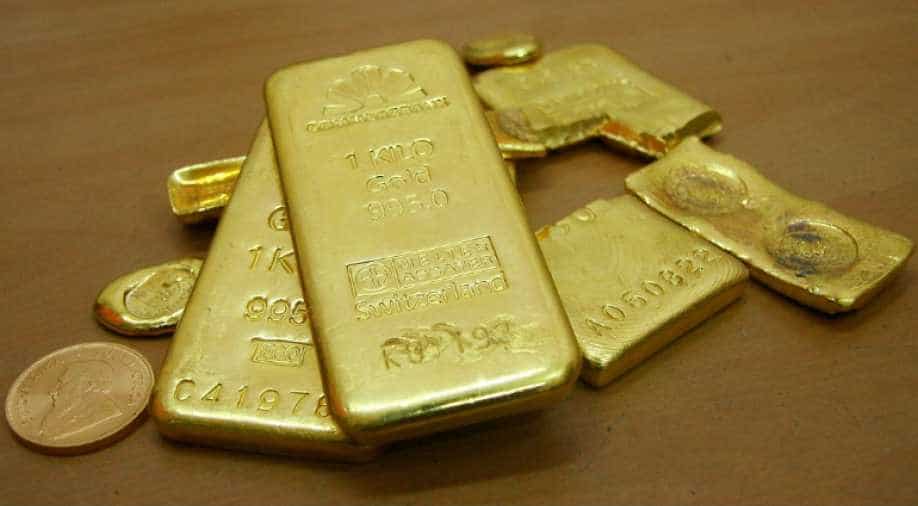 File photo of gold bars being displayed at a gold jewellery shop in the northern Indian city of Chandigarh. Photograph:( Reuters )

Among other metals, palladium, which hit a record high of $1,434.50 an ounce last week on low inventories and rising demand, was steady at $1,320 on Friday.

Gold prices edged higher on Friday amid concerns that a prolonged US government shutdown could exacerbate an already slowing global growth, while markets awaited US-China trade talks scheduled for next week.

Investors are worried about the economic impact of the longest US government shutdown in history, now in its 34th day, with two bills to end the partial shutdown failing to win enough votes in the Senate.

"There are some positive features supporting gold like the US government shutdown, ongoing trade war and potential for slower rate hikes," said John Sharma, an economist with National Australia Bank.

"At the moment, people are waiting for the US-China trade discussions," Sharma said, adding that any development on that front could provide a direction for gold.

The United States and China are "miles and miles" from resolving trade issues, but there is a fair chance the two countries will get a deal, US Commerce Secretary Wilbur Ross said on Thursday.

Concerns about slowing global economy and hopes that the US Federal Reserve will pause its multi-year rate hike cycle are supporting gold, analysts said.

A synchronised global economic slowdown is underway and any escalation in the US-China trade war would trigger a sharper downturn, according to the latest Reuters polls of hundreds of economists from around the world.

"We expect that a topping out of US real yields will put a firmer floor under gold prices this year and Fed's hiking cycle to peter out in 2019," said Sabrin Chowdhury, commodities analyst at Fitch Solutions.

"Global risk-aversion will rise in 2019 and flows into safe-haven assets, including gold, are likely to pick up."

Meanwhile, the dollar index, which measures the greenback against a basket of currencies, fell 0.2 per cent, after a report that Northern Ireland's Democratic Unionist Party has privately decided to offer conditional backing for Prime Minister Theresa May's Brexit deal next week.

A softer dollar makes gold less expensive for holders of other currencies.

Technically, spot gold has found support at $1,278 per ounce, and it may hover above this level or bounce towards resistance at $1,289, according to Reuters analyst Wang Tao.

Among other metals, palladium, which hit a record high of $1,434.50 an ounce last week on low inventories and rising demand, was steady at $1,320 on Friday.

It registered its biggest intraday percentage decline since December 21, falling 2 per cent to $1,313.50 on Thursday. The metal also was heading for its first weekly fall in five weeks.