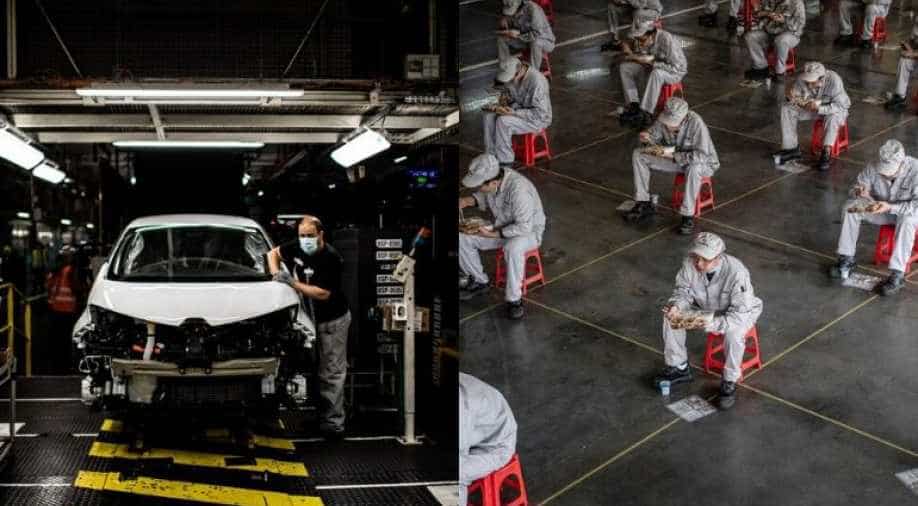 Sales hit a brake and showrooms were shut. The business suffered, auto companies across the world are surveying the damage now.

The coronavirus pandemic has slammed the brakes on the auto sector. Lockdowns had brought it to a screeching halt, both in terms of manufacturing and consumer demand. Carmakers across the world are now slowly restarting their factories.

Also read: WHO will continue to lead global fight against pandemic: Tedros

But while the production gets back on track, sales have nosedived. In April, it was down anywhere between 50 per cent to 100 per cent and the road ahead is set to be a rocky.

The Wuhan virus has devasted the auto industry. Car factories were among the first to be shut and manufacturing came to a halt.

Sales plummeted after showrooms were shut. Auto companies across the world are now surveying the damage.

And it doesn't look good. European auto market was down by over 76 per cent in April. New car registrations fell by over 55 per cent in March. Every EU nation has suffered double-digit losses.

Europe's automobile powerhouse - Germany witnessed a 61 per cent fall in car sales which is the worst since 1990. France saw new car sales fall nearly 89 per cent in April.

Italy and Spain, the worst hit by the Wuhan virus, saw virtually no sales. Their auto sector was down by almost 97 per cent in the last month.

Denmark and Sweden were the least hit. Their market fell by more than a third. Car majors like Fiat-Chrysler, Jeep and Alfa Romeo have suffered the most, however, BMW, Mitsubishi and Volvo fared the best.

In Britain, sales of new cars plunged 97 per cent in April. The worst in nearly 75 years. In Russia, car sales plummeted by 72 per cent in April 2020. Less than 40,000 units were sold. It's the biggest monthly drop since Russia's car sales figures began to be tracked in 2008.

The situation is so bad that American automakers are refusing to report monthly sales data. In Asia, the situation is grim with a15 per cent drop in March.

American auto sales have plunged so badly that companies are refusing to report monthly sales data. The likes of General Motors and Ford are now releasing only quarterly numbers.

However, carmakers in India are still putting out monthly sales numbers and they have been some of the worst in decades.

Passenger vehicle sales fell 50 per cent on average across companies. It is estimated that India's auto sector suffered a daily revenue loss of over $300 million due to plant closures.

All across the world car factories are slowly cranking back to work but things aren't about to get better anytime soon for automakers.

Rating agency Moody's expects global auto sales to plummet 20 per cent in 2020. That's because consumer sentiment has been the biggest casualty of all. Jobs and livelihoods are facing the wrath of the pandemic. People's confidence to spend big money buying cars is at the lowest.

Even as cars start lining up to be rolled out of assembly lines. The question is will people queue up to buy them?