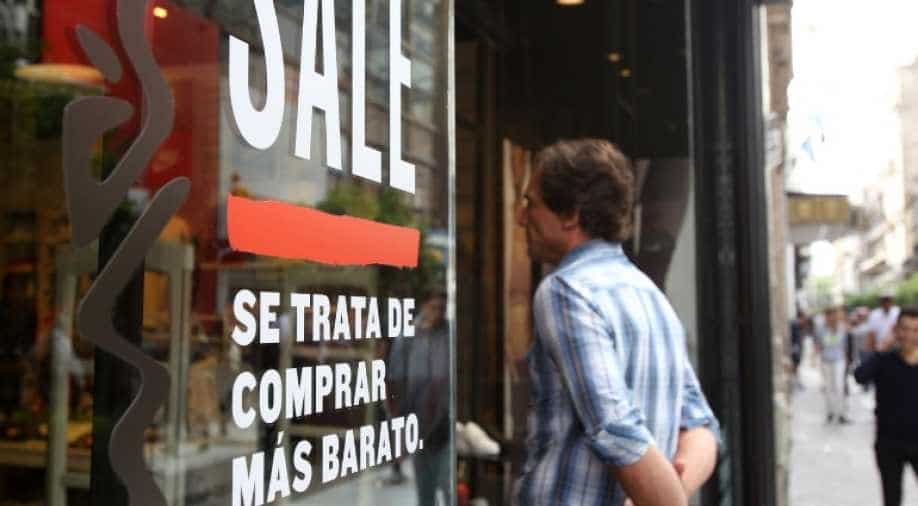 A man observes a sales sign at a shop, in Buenos Aires, Argentina. Photograph:( Agencia EFE )

In the first month of the year, the Consumer Price Index (CPI) rose by 2.9 per cent a month, an acceleration compared to the 2.6 per cent recorded in December.

Inflation in Argentina rose to 49.3 per cent year-on-year in January, according to data released Thursday by the National Institute of Statistics and Census (INDEC), a figure that even surpasses the 2018 figure of 47.6 per cent, setting a new record since 1991.

In the first month of the year, the Consumer Price Index (CPI) rose by 2.9 per cent a month, an acceleration compared to the 2.6 per cent recorded in December, but far from last September's peak, when inflation hit 6.5 per cent after the strong devaluation of the Argentine currency which triggered a rise in prices.

In the cumulative year-on-year, the rise for goods was 52 per cent, and 44.8 per cent for services, while in the monthly comparison goods rose by 2.6 per cent and services by 3.5 per cent.

Seasonal product prices rose by 33.2 per cent year-on-year, core inflation (excluding more volatile prices such as fuel) by 49.9 per cent and regulated prices (such as electricity or transport) by 55.4 per cent.

Compared to December, seasonal products became 1.1 per cent more expensive in January, core inflation was 3 per cent and regulated prices rose 3.4 per cent.

For restaurants and hotels, the CPI rose by 40.1 per cent, for clothing and footwear by 33.3 per cent, for education by 32.1 per cent and for alcoholic beverages and tobacco by 29,7 per cent.

On Thursday morning, the Argentine government announced that it expects inflation of around 28 per cent for this year, a figure projected by private consulting firms, which the Central Bank then releases every month.

The Secretary of Economic Policy, Miguel Braun, said that the government expects that in the coming months the rise of prices will remain "between two and three points" and will begin to fall in the second half of the year.