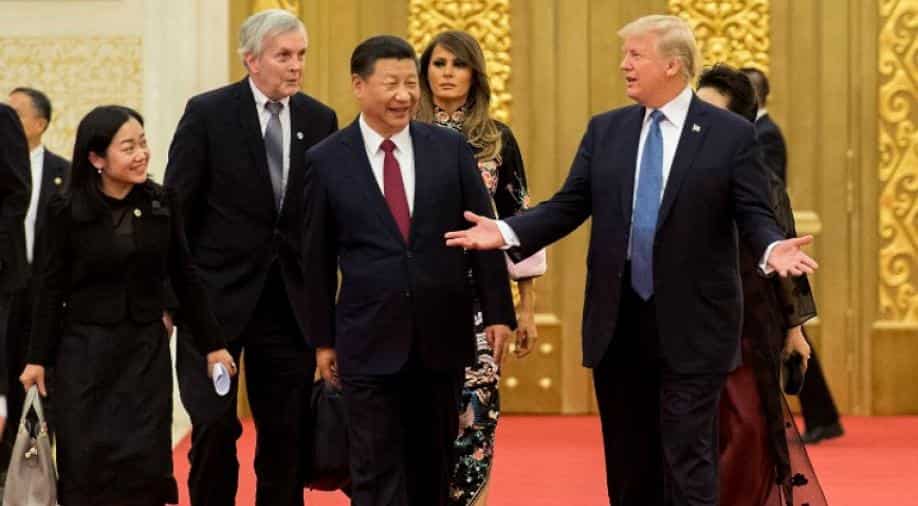 Hope for an imminent resolution of the China-US trade dispute dimmed after Trump vowed to further raise import tariffs this week to punish China.

What happens when the planet's two biggest economies play a high-stakes game of chicken?

The world may be about to find out, with President Donald Trump and his Chinese counterpart Xi Jinping both holding favourable enough economic hands to make it hard to predict who blinks first, analysts said.

Hope for an imminent resolution of the China-US trade dispute dimmed after Trump vowed to further raise import tariffs this week to punish China for what he framed as bad-faith negotiating, rocking world markets.

Here are some of the key questions regarding the impasse.

Why has Trump turned the screws now?That remains unclear but the president has been known to tout strong US economic data or Wall Street gains as evidence that he is "winning" the trade war and as leverage against China.

Recent developments will have given him ample reason to up the ante.

April data indicated vigorous American job growth, a fresh sign of US economic strength that has helped propel the S&P 500 and Nasdaq stock indices to record highs this month. Last month figures showed the world's top economy grew at a faster pace than expected in the first quarter.

How will China react?Beijing's shrewd communist leaders have been negotiating favourable economic arrangements with the world for decades, and few observers would bet on them suddenly capitulating.

Whatever Xi does, he also has reason to hold firm.

The world's second-largest economy is decelerating from its era of hyper-growth, but it expanded by a better-than-forecast 6.4 per cent in January-March, a sign of stability despite the trade turbulence.

And Chinese stock markets -- among the world's worst in 2018 -- are up significantly this year after Beijing pulled an array of policy and monetary levers to keep the economy chugging.

"Both sides have reason to be confident and ask for more," said Bao Ting, a strategist with Great Wall Securities.

"It's not surprising for negotiations to go back and forth in the final stages" as the two sides drill down on nitty-gritty details, she added.

So whose hand is stronger?Probably Trump's, analysts say, because Xi faces a challenge maintaining the economic growth on which the government stakes its ruling legitimacy, while also implementing tricky reform of inefficient state industries.

Of particular concern is a fresh spike in debt this year as Chinese authorities have relied heavily on eased credit restrictions to juice the economy while they battle Trump's trade pressure.

"This massive credit stimulus has stabilised China’s economy for now but the impact is unlikely to be long-lasting or without complication," said Brock Silvers, managing director of Kaiyuan Capital in Shanghai.

"China could soon regret a missed chance to end to what looks to be a worsening and increasingly risky trade war."

But China has for years used a flood of credit and targeted pump-priming to keep its economic miracle going, and today stands taller than ever.

"That gives China a lot of strength. They have many different ways of keeping things churning," said Christopher Balding, an expert on China's economy at Fulbright University in Ho Chi Minh City.

What if neither side blinks?Stocks fell worldwide after Trump's tariff threat, and an extension of the already lengthy trade standoff could spell more pain.

"If they fail to reach an agreement, China's economy would worsen and global economic growth would slow down," said Bao.

Much depends on whether China retaliates against Trump's move.

China is already wary over escalating the fight and seems unlikely to hit back with more tariffs at the moment and may favour yet more stimulus measures, said Tao Wang, head of China research for UBS.

But that could change. "Certainly the risk of an all-out US-China trade war has increased significantly," Tao said.

China said Tuesday its top negotiator, Vice Premier Liu He, would attend the talks in Washington this week, which Goldman Sachs said in a research note, "would indicate that they believe a deal is still reasonably likely".

Will China ever meet overall US demands?Key US demands include greater access to China's markets, broad reform of a business playing field that heavily favours Chinese firms, and a loosening of heavy state control by Beijing.

But those are the very policies that abetted China's stunning economic rise, and Beijing is unlikely to surrender them, said Balding.

"This is a fundamental clash of worldviews between a capitalist, open economy and a closed communist one," Balding said.

"There aren't a lot of ways to square that circle."

Asking for the moon may just be Trump's "Art of the Deal" approach to securing at least something that he can tout heading into elections next year.