Why Tesla soared as other automakers struggled to make cars 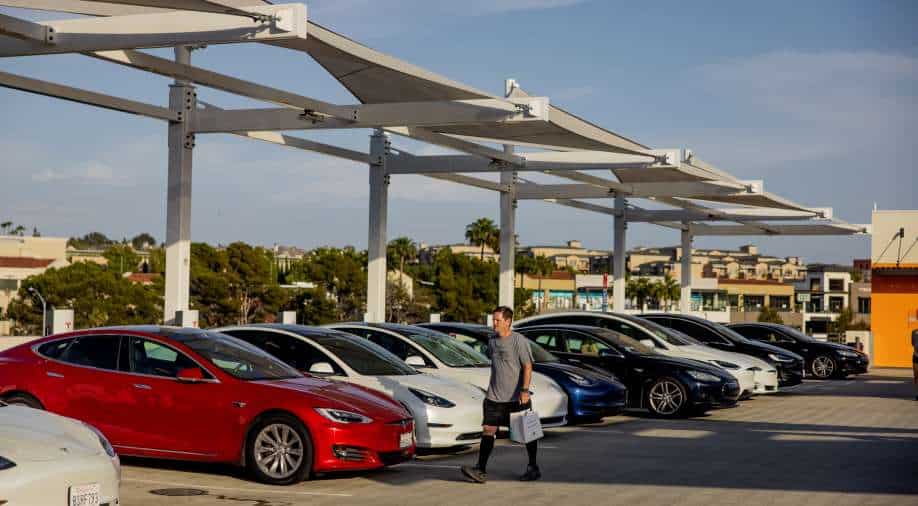 For much of last year, established automakers like General Motors and Ford Motor Co. operated in a different reality from Tesla, the electric car company.

GM and Ford closed one factory after another — sometimes for months on end — because of a shortage of computer chips, leaving dealer lots bare and sending car prices zooming. Yet Tesla racked up record sales quarter after quarter and ended the year having sold nearly twice as many vehicles as it did in 2020, unhindered by an industrywide crisis.

Tesla’s ability to conjure up critical components has a greater significance than one year’s car sales. It suggests that the company, and possibly other young electric car businesses, could threaten the dominance of giants like Volkswagen and GM sooner and more forcefully than most industry executives and policymakers realize. That would help the effort to reduce the emissions that are causing climate change by displacing more gasoline-powered cars sooner. But it could hurt the millions of workers, thousands of suppliers and numerous local and national governments that rely on traditional auto production for jobs, business and tax revenue.

Tesla and its enigmatic CEO, Elon Musk, have said little about how the carmaker ran circles around the rest of the auto industry. Now it’s becoming clear that the company simply had a superior command of technology and its own supply chain. Tesla appeared to better forecast demand than businesses that produce many more cars than it does. Other automakers were surprised by how quickly the car market recovered from a steep drop early in the pandemic and had simply not ordered enough chips and parts fast enough.

When Tesla couldn’t get the chips it had counted on, it took the ones that were available and rewrote the software that operated them to suit its needs. Larger auto companies couldn’t do that because they relied on outside suppliers for much of their software and computing expertise. In many cases, automakers also relied on these suppliers to deal with chip manufacturers. When the crisis hit, the automakers lacked bargaining clout.

Just a few years ago, analysts saw Musk’s insistence on having Tesla do more things on its own as one of the main reasons the company was struggling to increase production. Now, his strategy appears to have been vindicated.

Cars are becoming increasingly digital, defined by their software as much as their engines and transmissions. It’s a reality that some old-line car companies increasingly acknowledge. Many, including Ford and Mercedes-Benz, have said in recent months that they are hiring engineers and programmers to design their own chips and write their own software.

“Tesla, born in Silicon Valley, never outsourced their software. They write their own code,” said Morris Cohen, a professor emeritus at the Wharton School of the University of Pennsylvania who specializes in manufacturing and logistics. “They rewrote the software so they could replace chips in short supply with chips not in short supply. The other carmakers were not able to do that.”

Measured by vehicles delivered globally, Tesla vaulted past Volvo and Subaru in 2021, and some analysts predicted that it could sell 2 million cars this year, as factories in Berlin and Austin, Texas, come online and a plant in Shanghai ramps up production. That would put Tesla in the same league as BMW and Mercedes — something few in the industry thought possible just a couple of years ago.

GM and Ford, of course, sell many more cars and trucks. Both companies said last week that they sold around 2 million vehicles last year just in the United States.

Tesla, which rarely answers questions from reporters, did not respond to a request for comment for this article. It has said little publicly about how it managed to soar in a down market.

“We have used alternative parts and programmed software to mitigate the challenges caused by these shortages,” the company said in its third-quarter earnings report.

The performance is a stark turnaround from 2018, when Tesla’s production and supply problems made it an industry laughingstock. Many of the manufacturing snafus stemmed from Musk’s insistence that the company make many parts itself.

Other car companies have realized that they need to do some of what Musk and Tesla have been doing all along and are in the process of taking control of their onboard computer systems.

Mercedes, for example, plans to use fewer specialized chips in coming models and more standardized semiconductors, and to write its own software, said Markus Schäfer, a member of the German carmaker’s management board who oversees procurement.

In the future, Mercedes will “make sure we have customized, standardized chips in the car,” Schäfer said in an interview Wednesday. “Not 1,000 different chips.”

Mercedes will also design its own vehicle hardware, he said. Without mentioning Tesla, Schäfer added, “Probably some others were earlier going down this road.”

Doing more on its own also helps explain why Tesla avoided shortages of batteries, which have limited companies like Ford and GM from selling lots of electric cars. In 2014, when most carmakers were still debating whether electric vehicles would ever amount to anything, Tesla broke ground on what it called a gigafactory outside Reno, Nevada, to produce batteries with its partner, Panasonic. Now, that factory helps ensure a reliable supply.

“It was a big risk,” said Ryan Melsert, a former Tesla executive who was involved in construction of the Nevada plant. “But because they have made decisions early on to bring things in-house, they have much more control over their own fate.”

As Cohen of Wharton pointed out, Tesla’s approach is in many ways a throwback to the early days of the automobile, when Ford owned its own steel plants and rubber plantations. In recent decades, the conventional auto wisdom had it that manufacturers should concentrate on design and final assembly and farm out the rest to suppliers. That strategy helped reduce how much money big players tied up in factories but left them vulnerable to supply chain turmoil.

It also helps that Tesla is a much smaller company than Volkswagen and Toyota, which in a good year produce more than 10 million vehicles each. “It’s just a smaller supply chain to begin with,” said Melsert, who is now CEO of American Battery Technology Co., a recycling and mining firm.

The Tesla lineup is also more modest and easier to supply. The Model 3 sedan and Model Y SUV accounted for almost all of the company’s sales in 2021. Tesla also offers fewer options than many of the traditional carmakers, which simplifies manufacturing.

“It’s a more streamlined approach,” said Phil Amsrud, a senior principal analyst who specializes in automotive semiconductors at IHS Markit, a research firm. “They are not trying to manage all these different configurations.”

Tesla software, which can be updated remotely, is considered the most sophisticated in the auto business. Even so, the company’s cars likely use fewer chips, analysts said, because the company controls functions like battery cooling and autonomous driving from a smaller number of centralized, onboard computers.

“Tesla has fewer boxes,” Amsrud said. “The fewer the components you need right now, the better.”

Of course, Tesla could still run into problems as it tries to replicate the growth it achieved in 2021 — it is aiming to increase sales about 50% a year for the next several years. The company acknowledged in its third-quarter report that its creative maneuvering around supply chain chaos might not work so well as it increased production and needed more chips and other parts.

The electric vehicle market is also becoming much more competitive as the traditional carmakers belatedly respond with models that people want to buy rather than the small electric vehicles typically made to appease regulators. Ford said this past week that it would nearly double production of the Lightning, an electric version of its popular F-150 pickup truck, because of strong demand. Tesla’s pickup truck won’t go on sale for at least another year.

The outlook for the traditional carmakers is likely to improve this year as shortages of semiconductors and other components ease, and as manufacturers get better at coping.

Tesla vehicles still suffer from quality problems. The company told regulators in December that it planned to recall more than 475,000 cars for two separate defects. One could cause the rearview camera to fail, and the other could cause the front hood to open unexpectedly. And federal regulators are investigating the safety of Tesla’s Autopilot system, which can accelerate, brake and steer a car on its own.

“Tesla will continue to grow,” said Stephen Beck, managing partner at cg42, a management consulting firm in New York. “But they are facing more competition than they ever have, and the competition is getting stronger.”

The carmaker’s fundamental advantage, which allowed it to sail through the chip crisis, will remain, however. Tesla builds nothing but electric vehicles and is unencumbered by habits and procedures that have been rendered obsolete by new technology. “Tesla started from a clean sheet of paper,” Amsrud said.