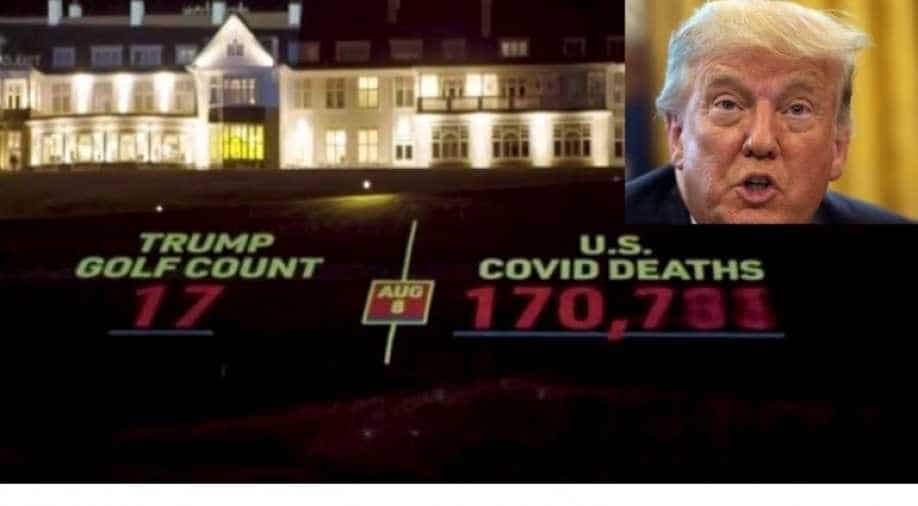 The video also shows the US president criticising former president Barak Obama for playing golf and promising never to play golf if he was elected president.

Protesters in US President's Trump luxury Turnberry resort illuminated part of the area in Ayrshire, Scotland to show the number of times he played golf during the COVID-19 pandemic.

The projector shows the number of times Trump went to play golf as the US COVID-19 casualties mounted.

A short 57-second video showed Trump has gone to play his favourite sport 24 times since March 7, 2020 when the US began suffering serious casualties nationwide.

America on Tuesday crossed the 200,000 fatalities due to the virus with over 6.86 million cases even as Trump blamed China for the outbreak at the UNGA.

The audio at Turnberry resort ends with Trump saying: "When you're in the White House, who the hell wants to play golf?".

The video also shows the US president criticising former president Barak Obama for playing golf and promising never to play golf if he was elected president.

The video was posted by the Led By Donkeys campaign. Trump had played a round of golf at the resort during his trip to the UK two years ago which reportedly cost the UK taxpayers £14.2 million to maintain police presence.

Several thousand protesters had visited the golf course at Turnberry resort at that time but there were no reports of violence. The US president had also visited the resort in 2016 to reopen it after refurbishment.