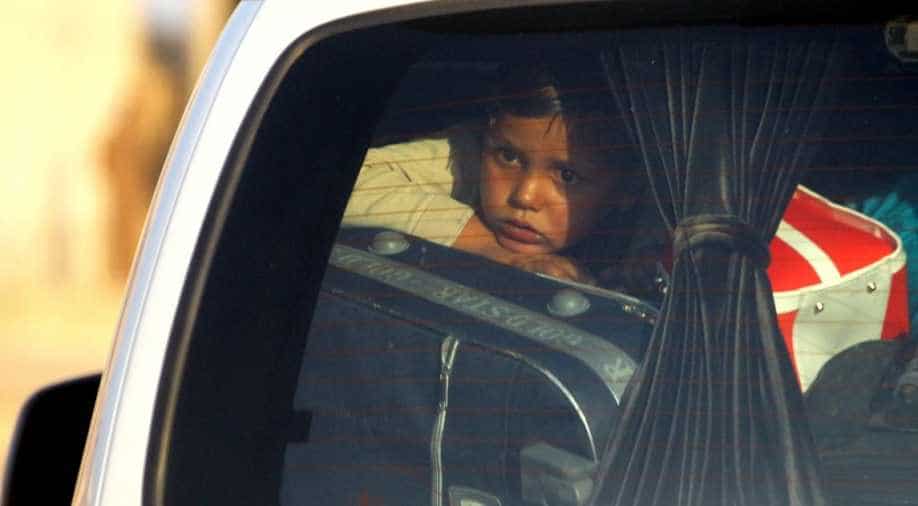 A child is seen in a vehicle with belongings as they flee, in Tel Abyad, Syria.  Photograph:( Reuters )

Burying fighters killed in a nearly week-long battle against Turkish forces in northern Syria, the country's Kurdish minority denounced a "betrayal" by United States allies that paved the way for Ankara's offensive.

In a graveyard in the Kurdish-majority city of Qamishli, 57-year-old Basna Amin watched as the newly fallen were laid to rest near comrades who died in the US-backed fight against the Islamic State group.

"We are disappointed because (the Americans) betrayed us," she said, a black and white headscarf covering her hair.

"The world wants the Kurds to always be broken," she told AFP.

At least 135 Kurdish fighters have been killed in Ankara's assault triggered by last week's US pullout from border areas in Syria's north, according to the Britain-based Syrian Observatory for Human Rights.

Washington's move, widely interpreted as green-lighting the long-planned Turkish invasion, has sparked resentment among the Kurds who have already lost 11,000 of their fighters in anti-IS battles.

Sitting near the grave of her son who died battling jihadists in 2014, Jawahir said that sacrifices by Syria's Kurds will compensate for the blow dealt by Washington.

"We have been betrayed before," she said.

"All the gains we have scored are thanks to the blood of these martyrs," she added.

"Their blood will not go to waste."

Around her, women hunkered beside graves, their eyes red with tears.

Hundreds had streamed into the graveyard to bury fighters killed in recent border battles, the portraits of 'martyrs' plastered on coffins and pinned to clothes.

'Pay with our children'

Dressed in military fatigues, a female Kurdish fighter pressed her body against a colourful casket, held up by a sea of mourners.

She stroked the coffin's lid, its floral arrangement matching the pattern on her black headscarf.

In the crowd below, another woman whispered inaudible words as she caressed a similar coffin, decorated with ribbons, flowers and a red sheet.

Trump, who is campaigning for re-election but faces impeachment, is keen to deliver on a promise of pulling US troops out of the Syria quagmire.

More than 1,000 troops are now being withdrawn from northern Syria and the United States will keep only a residual contingent of some 150 troops in the south at the Al-Tanf base near the borders with Jordan and Iraq.

"They used to break bread together, and fight terrorism together, it is a big disappointment," said Farida Bakr, speaking on Washington's decision to withdraw troops.

But "we will stay on our land, and we will fight until we are victorious, even if we have to pay with our children," said the 50-year-old.

Around her, women ululated in grief.

Others in headscarves stood silently, raising two fingers in a victory gesture, their solemn gaze directed to the floor.

They waved baskets carrying candles and henna dye, a custom during funerals for the young.

For Souad Hussein, whose children are among those fighting Ankara's forces, the Kurds can rely only on themselves.

"We have hope only in our forces because the Kurds have no friends," she told AFP.

"We will be friends to ourselves and we will confront our enemies."