Wearable fans in clothes? Pet animals in Japan get a breather from the scorching heat 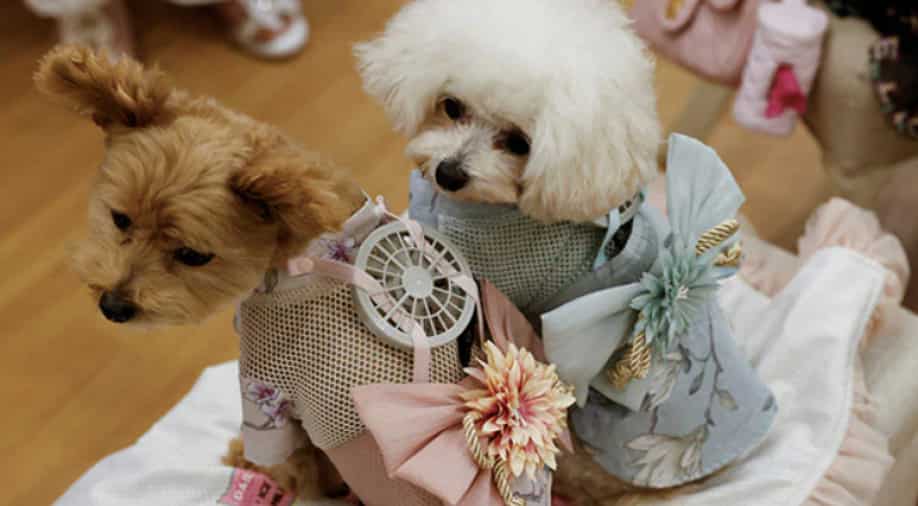 The wearable device clothing is priced at $74 Photograph:( Reuters )

The company making the device clothing has already received more than 100 orders. The rising mercury in Japan has forced pet owners to look for alternatives to protect their pets from the searing heat

The searing heat across the planet has not only affected humans but animals as well. Now, a Tokyo-based clothing maker named Sweet Mommy has come up with a novel clothing solution that may help pet animals brave the scorching heat.

Working with a group of veterinarians, the clothing company has added wearable fans to the clothes of pets. Attached to a mesh outfit is a wearable fan that weighs 80 grammes and is operated by a battery.

Reportedly, the device blows air, all around the animal's body and comes in five different sizes. The reception has been fairly decent as well. Since its debut in July, the company has already received more than 100 orders. A single piece costs as much as $74.

Speaking about the motivation behind the ingenious design, Rei Uzawa, the president of the company said, "There was almost no rainy season this year, so the hot days came early, and in that sense, I think we developed a product that is right for the market,"

Pet owners in Japan have been using dry-ice packs to keep their pets cool. However, with pets roaming around frequently, it becomes harder to keep it strapped on. The ergonomic design of the device by Rei Uzawa and her company is expected to bring relief to both the pets and their owners.

Why has the need for such clothes arisen in Japan?

It is pertinent to note that Japan has already witnessed its hottest day ever in the month of June when the temperature crossed the 35ºC barrier. It was the highest temperature ever recorded since record-keeping began in 1875.

The rise in mercury was unusual for the month of June as it is considered a rainy season. However, after the hot weather persisted, the Japan Meteorological Agency (JMA) was forced to declare an end to the rainy season in the capital city of Tokyo and surrounding areas.