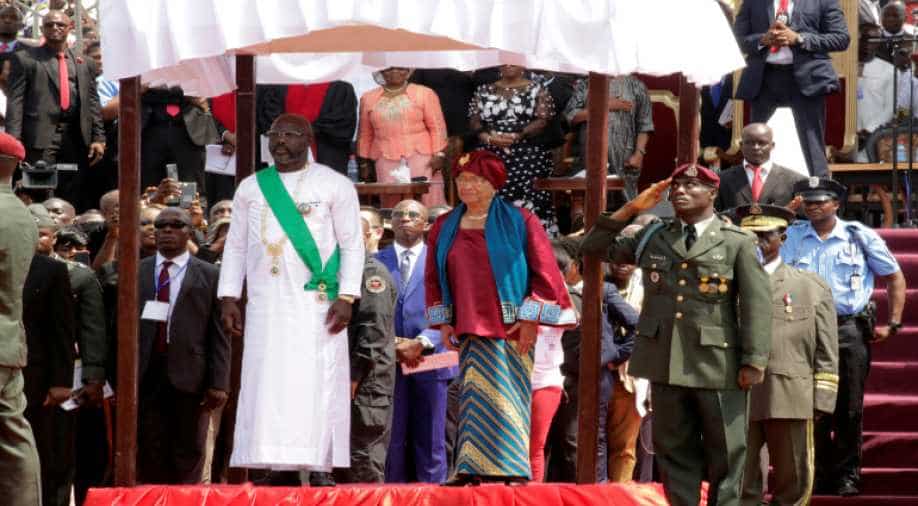 As a former AC Milan and Paris St Germain striker and 1995 world player of the year, "King George" as his fans call him was no stranger to having crowds cheering him on in packed stadiums. Photograph:( Reuters )

George Weah, the former international soccer star who won the presidency of Liberia last month, promised a crackdown on endemic corruption as he was sworn in on Monday.

Thousands of exuberant supporters and regional presidents and dignitaries crammed into a stadium in the capital Monrovia to watch as Weah, who rose from the city's slums to become one of Africa's greatest footballers, took the oath of office.

As a former AC Milan and Paris St Germain striker and 1995 world player of the year, "King George" as his fans call him was no stranger to having crowds cheering him on in packed stadiums.

But he was also aware of the huge hurdles ahead as he replaced Nobel Peace Prize winner Ellen Johnson Sirleaf in Liberia's first peaceful change of power for seven decades.

"It will be my task to lead this nation from division to unity. I will not let you down," Weah told the crowd.

Weah, 51, rode to a landslide run-off victory last month on the back of heavy support from young people and the poor.

Making his speech in flowing white African robes, he promised to deliver on his key campaign promises, especially tackling the malfeasance that his predecessor is widely seen as having failed to do during her 12 years in office.

"It is my belief that the most effective way to directly impact the poor, and to narrow the gap between the rich and the poor is to make sure that public resources do not end up in the pockets government officials," he said.

Founded by freed American slaves, Liberia is Africa's oldest modern republic. But it has been plagued by years of unrest and bloodshed, including two civil wars in the 1980s and 90s that were notorious for their brutality and use of child soldiers.

Johnson Sirleaf was credited with shoring up peace after that war, but criticised for failing to tackle elite graft or do much to lift Liberians out of poverty.

And in a nod to his opponents, Weah sought to turn the page on what was a bitter election battle, delayed for months by legal wrangling but which despite hot tempers on all sides did not descend into bloodshed.

"We must not allow political loyalties prevent us from collaborating in the national interest," he said. "Blood should never be the price tag for democracy. ... This transition was achieved by ... (the) democratic will of the Liberian people."

But Weah will also have to manage expectations, which are sky high following his win.

"Today is a great day for me and my country. I expect job creation and development," said Agnes Echoing, deputy director of Liberia's lottery authority, seated in a wheel chair.

"We will (also) need empowerment for people with disabilities," she said. "I am excited."