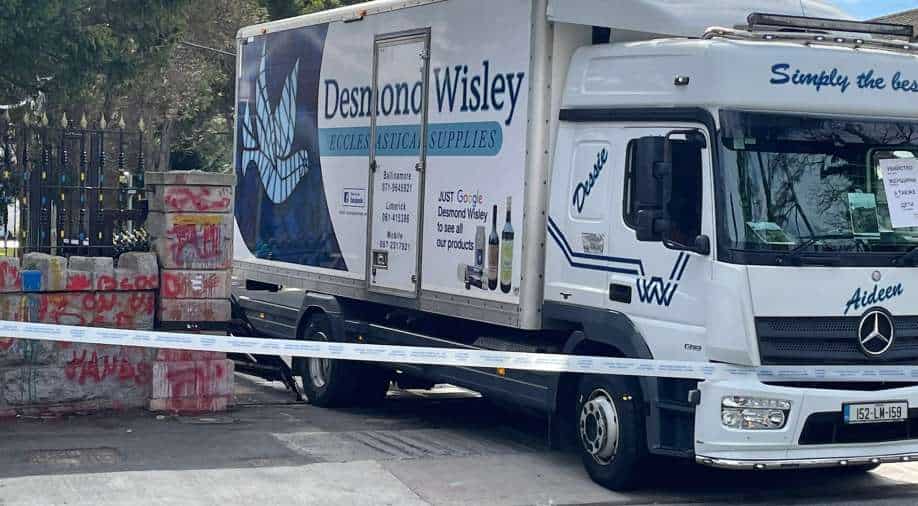 After ploughing his lorry into the gates, Wisley got out of his vehicle and handed out photos to other protesters showing what Russian troops are doing in Ukraine

A man in Ireland rammed his truck through the gates of the Russian embassy in Dublin as part of his protest against the Russian invasion of Ukraine—earning applause from onlookers.

According to local media reports, the incident took place on Monday around 1.30 pm and no injuries were reported.

The Irish police have arrested local businessman Desmond Wisley and launched an investigation into the incident of “criminal damage”.

"One male was arrested and taken to Rathfarnham Garda Station where he is currently detained under Section 4 of the Criminal Justice Act, 1984," a police spokesperson said in a statement. "Investigations are ongoing.”

Videos of the incident appeared on social media showing an ecclesiastical truck with a trailer reversing into the gates, forcing them to open.

Desmond Wisley has breached the gates of the Russian Embassy in #Dublin. He was overcome after seeing photos of the family killed in Irpin. pic.twitter.com/8SMbZIYxK0

After ploughing his lorry into the gates, Wisley got out of his vehicle and handed out photos to other protesters showing what Russian troops are doing in Ukraine, according to The Irish Times.

“I've just done this to create a safe corridor for the Russian ambassador to leave Ireland,” Wisely told the crowd of protesters.

“I want the ambassador and his colleagues to leave this country, leave this free country,” Wisely added. "It's about time we stood up."

As the officer leads him away, uncuffed, Wiley declares: “I’ve done my bit lads. It’s about time Ireland does theirs.”

In a statement to The Irish Times, a Russian embassy spokeswoman accused the Garda police officers of standing idle during the incident.

“The embassy strongly condemns this criminal act of insanity directed against a peaceful diplomatic mission. The embassy views this incident as a clear and blatant violation of the article 22 of the Vienna Convention on Diplomatic relations of 1961.

"The embassy is in contact with the Department of Foreign Affairs of Ireland, demanding that the Irish authorities take comprehensive measures to ensure the safety of its staff and their family members.

"The incident is cause of extreme concern. We believe that no people of sound mind could support such senseless and barbaric actions," the spokeswoman said.